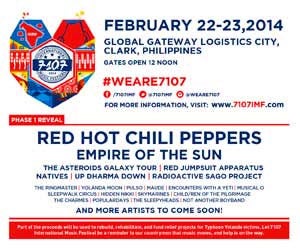 MANILA, Philippines – Organizers of the coming 7107 International Music Festival has denied rumors in social media networks that bankrollers of the 1969 Woodstock-inspired music event include one of the children of alleged pork barrel scam mastermind Janet Lim-Napoles.

“As much as people would want to assume that, it’s absolutely not true,” festival executive producer Conchitina Herrera said during a press con on Tuesday. Herrera described the persistent rumors as “very serious allegations.”

The festival, set Feb. 22 and 23 at the Global Logistics Gateway City in Clark, Pampanga—was being funded by “multiple revenue sources,” she said. “We have corporate sponsors like Smart. We have ticket and concessionaire sales. These… are enough to make a festival successful.”

She’s been in the events [management] business for 17 years, said Herrera, who also organizes Philippine Fashion Week. “I know how to make an event happen.”

Asked if she was concerned about potential concert-goers doubting the integrity of 7107, Herrera said: “I can’t control what they believe and how they will react. What I can control is how forward we [as organizers] are in addressing matters like that.”

Meanwhile, she said, ticket sales “are pretty much right on target— already at 65 percent, and we have another month to go.” Target attendance is 20,000, “but we have prepared the venue for 35,000.”