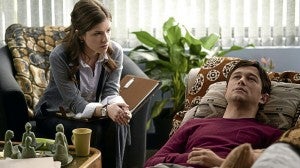 TORONTO – A film about a young man with a massive, malignant tumor on his spine is funny, believe it or not, and is one of the best films in the ongoing Toronto International Film Festival.

“50/50,” a dramedy previously titled “I’m With Cancer,” is one of the entries that we watched in a crazy week of nightly screenings in LA before we flew here. Surprisingly, most of them are exceptionally good.

Written by Will Reiser, who wrote projects for HBO, “50/50” is based on his being diagnosed, at 24, of having lymphoma – but further tests showed that a giant tumor was growing on his spine. While it’s a fictional account, the film benefits from Will’s personal insights, a terrific cast composed of Joseph Gordon-Levitt, Anna Kendrick, Anjelica Huston, Bryce Dallas Howard and Seth Rogen, Will’s best friend in real life, who personally witnessed his battle.

Director Jonathan Levine (“The Wackness,” winner of the 2008 Sundance Film Fest Audience Award) succeeds in the difficult task of making the movie amusing and moving at the same time, never pandering to cheap sentiment.

Joseph proves once more that he is one of the finest young actors around. There are scenes without dialogues that are deeply moving; for instance, his character, Adam Lerner and Seth’s Kyle just looking and smiling at each other, understanding as only true best friends can.

Will’s script crackles with wit and realism. Seth, in one of his finest performances yet, has some of the best lines. Anjelica as Adam’s mom is memorable.

I tip my hat off to David Cronenberg for making a film about Sigmund Freud (Viggo Mortensen) and Carl Jung (Michael Fassbender) as they discuss psychoanalysis, theories of the unconscious mind, dream analysis and the mechanism of repression.

Under David’s direction, “A Dangerous Method” is a “quiet, still” movie yet it had us completely absorbed as Freud and Jung forge a friendship on the eve of World War I. Michael is up to the task of sparring verbally with the veteran Viggo. But the latter, even when he is just pensively smoking a cigar, is riveting. Keira Knightley as the unbalanced Sabina Spielrein delivers a courageous performance.

Vincent Cassel (“Black Swan”) as Otto Gross, a patient who encourages Jung to give in to his lust for Sabina, and Sarah Gadon as Jung’s wife Emma, round up the brilliant cast.

With Ryan Gosling’s career-defining performances in Nicolas Winding Refn’s “Drive” and George Clooney’s “The Ides of March,” it is officially the year of the young actor.

As a movie stuntman who sidelines as a getaway driver by night in “Drive,” Ryan shows impressive depth. His nameless character transforms into an impassioned man when he becomes involved with a woman (Carey Mulligan) and her son, and gets caught up in a heist that goes awry. His naturally goofy charm almost undermines the film but, on second thought, it adds humanity to the man who leads a solitary, almost robot-like existence until Carey’s character comes along.

George Clooney, as director, also gets a solid performance from Ryan in “The Ides of March,” a political drama based on Beau Willimon’s play, “Farragut North,” inspired by his experience in Howard Dean’s presidential campaign in Iowa. While George also stars as a governor running for president, the film belongs to Ryan as campaign press secretary Stephen Meyers.

Meanwhile, George has the big role in Alexander Payne’s “The Descendants,” a drama set in Hawaii. He plays Matt King, “the back up parent, the understudy” until his wife’s accident left her comatose. Suddenly, Matt has to step up as parent to two daughters played by Shailene Woodley and Amara Miller.

Alexander, who also wrote and directed “Sideways,” balances the humor and tragedy that takes place in Hawaii. There’s a memorable turn by Judy Greer as the wife of a man who gets involved with the King family.

Who knew that those Olsen twins have a younger sister? Well, after film lovers see “Martha Marcy May Marlene,” they will know that the enterprising twins have a talented actress for a sister in Elizabeth Olsen. She plays a young woman who escapes from a rural cult-like community. Elizabeth has the chops to tackle the difficult role of her character as she deals with fear, paranoia and guilt. Sean Durkin won best director in Sundance early this year and the Cannes Prix de la Jeunesse.

Michael Shannon and the suddenly ubiquitous Jessica Chastain star in “Take Shelter.” Michael’s character, Curtis LaForche, is a working class husband and father who begins to have terrifying dreams and hallucinations. They lead him to an obsession to build a storm shelter in his backyard.

Chastain, as the wife who is confounded by her husband’s apocalyptic vision, proves yet again why she is this year’s “it” actress. Michael is superb as usual.

In “The Skin I Live In,” Pedro Almodovar delivers a stylish drama apropos to this age. Antonio Banderas plays a crazed plastic surgeon who experiments on Vera (the beautiful Elena Anaya) in a secret, private project. This movie will leave some folks cold and curiously uninvolved, but some may be fascinated with the Almodovar-esque, thriller goings-on.

An amusing surprise: When members of the Madrid surgeon’s household staff are let go, they storm out of the mansion, luggage and all, speaking in Filipino!

From drug dealer to savior

Amid all these small, intimate fare, Marc Forster’s “Machine Gun Preacher” comes off as the “big, noisy” movie. Even the title seems to support the claim. Gerard Butler portrays Sam Childers, a real-life former drug dealer who turns into a savior of hundreds of children who are orphaned, kidnapped and forced to become soldiers for a brutal militia in East Africa. Ultimately, what is most harrowing is that this violence continues to this day in Sudan, Uganda and the Congo.