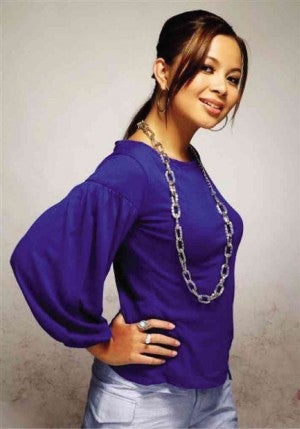 SHE WANTS to stretch her range and try spoken-word songs someday. photo: www.sittionline.com

Pop-bossa nova singer Sitti has never really been “conscious or hands-on” when it comes to doing the type of music she wants or should be doing. Thus she vowed that 2014 will be a year of self-exploration, and of being proactive in expanding her knowledge in music.

For the 29-year-old artist, it all starts with honing her underutilized songwriting skills. “My focus right now is to discover what’s inside me. I want to write more and maximize my talent,” Sitti told the Inquirer during the recent press launch of her new album “Bossa Love” (MCA Music).

“I want to learn new songs and musical forms. I want to listen to new artists and simply do things I haven’t had the chance to do before,” added Sitti.

She has been singing professionally for a decade or so, and has released about 10 albums. She signed with MCA in 2013 after being a Warner artist for six years.

This appetite for growth was fueled when she joined the 4th Elements National Songwriting Camp held in Dumaguete City late last year—not as a mentor, but as one of the campers. While she wasn’t exactly new to writing songs, Sitti said she was never completely confident about her works.

It was a rather bold and curious move for Sitti since such a five-day workshop was usually attended by young aspirants, and not established recording artists like her. “To be perfectly honest, mas amateur pa ako sa kanila when it comes to songwriting,” she said, laughing.

“I had to join the camp for my own good—to realize my full potential. And I knew that I couldn’t do it on my own,” added Sitti, who was mentored in the camp by some of the industry’s finest such as Ryan Cayabyab, Ogie Alcasid, Rey Valera and Jim Paredes.

“I was able to touch base with people … [on] the same wavelength. All we ever wanted to do was sing and write, and then sing and write some more. It was a wonderful experience. The freedom and inspiration I had were priceless,” she related, adding that spending time with the campers inspired her to do more collaborations in the future.

Sitti likewise discovered things about herself that surprised her. “For instance, I never knew that I could actually rap a little! And I’m actually entertaining thoughts of doing spoken-word songs,” she said. “I came out of the camp with more conviction in what I do.”

In 2011, Sitti released “Sessions,” an album which contained mostly original pop songs and ballads. It was well-received by some fans, but many others felt that she should go back to doing covers with a bossa nova twist.

This was one of the reasons she and her current label did the all-covers album “Bossa Love,” which boasts a diverse selection of popular songs from the 1990s to 2010 like “Sunday Morning” by Maroon 5, “Yellow” by Coldplay and “Waterfalls” by TLC.

“I’ve come back to where I started. It’s my way of saying thank you to all those who supported me from the start. I want to explore more variations of bossa nova to improve my musicality” she said. “‘Bossa Love’ is about a kind of love that wants others to be free and happy.”

Releasing an all-covers album seems to go against her current state of mind. But she plans to come up with more personal and original material once she feels that she’s fully ready to do so.

“Of course I don’t want to be boxed in one genre, but I have to take my time,” she pointed out. “I’ll continue to write and learn while promoting my current album,” said Sitti, who will be holding a concert at the Music Museum tomorrow night, with guests Jett Pangan and the “ASAP 18” Sessionistas.

“I used to be anxious tackling particular songs or performing in daunting venues, but I have to take those things head on,” she stressed. “I’ve realized that magical things happen when you’re honest and when you keep pushing yourself. I have to snap out of being lulled into complacency.”

The repeat of Lea Salonga’s concert “Playlist” goes onstage at the Plenary Hall of the Philippine International Convention Center tomorrow night at 8. Like in the original shows, “The Voice of the Philippines” winner Mitoy Yonting and “Miss Saigon” cast member Rachelle Ann Go are the guests.

The Society of Filipino Archivists for Film (Sofia) will screen National Artist Gerardo de Leon’s “Sisa” at the Tanghalang Manuel Conde of the Cultural Center of the Philippines tomorrow at 4 p.m.

Released in 1951, the film features Anita Linda as the iconic madwoman in Jose Rizal’s “Noli Me Tangere.” The screening is part of Sofia’s monthly series that celebrates the centennial of De Leon’s birth. Linda will grace the screening.Bayani San Diego Jr.