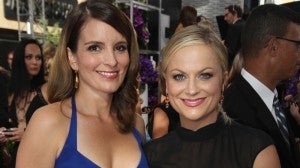 Tina Fey and Amy Poehler picked up where they left off, kicking off the 71st annual Golden Globes with a torrent of punch lines that lambasted Matt Damon, Meryl Streep and, of course, George Clooney.

Last year’s co-hosts again had the Beverly Hills Hilton rolling in an opening act Sunday night. The starry audience roared most of all when Fey described the four-Globe nominee space odyssey “Gravity.”

“George Clooney would rather float away in space and die than spend one more minute with a woman his own age,” said Fey.

The first award of the night went to Jennifer Lawrence for supporting actress for her performance in David O. Russell’s con-artist caper “American Hustle.” The award returned Lawrence, a winner last year for Russell’s “Silver Linings Playbook,” to the stage for an acceptance speech — something she said was no easier a year later.

But Fey and Poehler’s playful interplay again stole the show. They’re also signed up to host next year.

“This is Hollywood,” explained Fey. “If something kind of works, they’ll just keep doing it until everyone hates it.”

Poehler said that in such a starry crowd, Damon was “basically a garbage person.” The Tracy Letts play adaptation “August: Osage County,” starring Streep, Fey said, proved “that there are great parts in Hollywood for Meryl Streeps over 60.”

There was a bit of a problem for arrivals: A part of the red carpet was drenched when a lighting rig set off a sprinkler a few hours before show time. Crews used vacuums to clean it up.

Poehler and Fey last year brought the Globes telecast to a six-year ratings high of 19.7 million, winning universal praise along the way for their irreverent cracks that playfully punctured Hollywood’s veneer.

The 71st Globes show finds itself on the upswing. While the more prestigious and meaningful Academy Awards ceremony wrestles awkwardly with updating its brand, the Globes telecast has thrived as a more comic, unpredictable affair, free of Oscar’s self-regard and musical dance numbers.

The favorites Sunday night are David O. Russell’s con-artist caper “American Hustle” and Steve McQueen’s unflinching epic “12 Years a Slave.” The films and their much-nominated ensemble casts lead with seven nominations each, but they will be kept mostly separated by the Globes’ split between comedy-musical and drama categories.

Alfonso Cuaron’s space odyssey “Gravity,” a worldwide hit starring Sandra Bullock, is just as much a front-runner, only with a more limited cast. When Oscar nominations are announced Thursday morning, “Gravity” (nominated for four Globes) will likely clean up in the technical achievement categories that the Globes don’t honor.

The Hollywood Foreign Press Association, a group of about 85 mostly freelance foreign journalists, has recently undergone a change in leadership and, perhaps, a shift toward respectability. While the Globes have in the past been known for curious nominees like “The Tourist” and “Salmon Fishing in the Yemen,” this year’s nominees were seen as without such oddities.