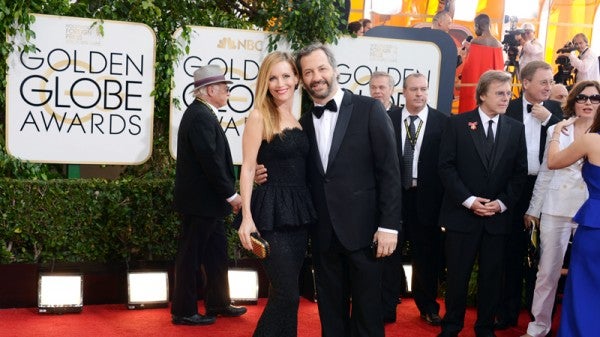 Arrivals streaming into the Beverly Hilton for Sunday night’s Golden Globe had to navigate one unlikely obstacle: A part of the red carpet was drenched when a lighting rig set off a sprinkler a few hours before show time. Crews used wet dry vacuums to clean it up.

Amy Adams arrived sporting a red dress with a plunging neckline reminiscent of her attire in the 1970s-set “American Hustle.”

“I was kind of influenced by my character,” Adams said on NBC’s red carpet broadcast.

The surest bet at the Globes? Hosts Tina Fey and Amy Poehler.

For the second year in a row, the duo will lead the Hollywood Foreign Press Association’s annual glitzy banquet, where stars gather for a boozy dress rehearsal to the Academy Awards. Poehler and Fey last year brought the Globes telecast to a six-year ratings high of 19.7 million, winning universal praise along the way for their irreverent cracks that playfully punctured Hollywood’s veneer.

With Fey and Poehler signed up for next year, too, the 71st Globes show finds itself on the upswing. While the more prestigious and meaningful Academy Awards ceremony wrestles awkwardly with updating its brand, the Globes telecast has thrived as a more comic, unpredictable affair, free of Oscar’s self-regard and musical dance numbers.

The favorites Sunday night are David O. Russell’s con-artist caper “American Hustle” and Steve McQueen’s unflinching epic “12 Years a Slave.” The films and their much-nominated ensemble casts lead with seven nominations each, but they will be kept mostly separated by the Globes’ split between comedy-musical and drama categories.

Alfonso Cuaron’s space odyssey “Gravity,” a worldwide hit starring Sandra Bullock, is just as much a front-runner, only with a more limited cast. When Oscar nominations are announced Thursday morning, “Gravity” (nominated for four Globes) will likely clean up in the technical achievement categories that the Globes don’t honor.

Those films and others will bring a room full of famous faces to the Globes show, airing live on NBC from 8-11 p.m. EST, including nominees Tom Hanks, Robert Redford, Meryl Streep, Cate Blanchett, Julia Roberts, Matthew McConaughey, Cate Blanchett, Bruce Dern and many others.

One celebrity not likely to attend is Woody Allen, the recipient of the Cecil B. DeMille lifetime achievement award. The director famously disdains award shows and his “Anne Hall” star Diane Keaton is expected to accept on his behalf.

The television side could shape up as a battle between HBO and new challenger, Netflix. Tied for a leading four nominations are HBO’s Liberace drama “Behind the Candelabra” and Netflix’s first major foray into original programming, the political thriller “House of Cards.”

Lena Dunham’s comedy sensation “Girls” was in the unusual situation of premiering its third season on HBO while its cast and creators attended the Globes on NBC.

The Hollywood Foreign Press Association, a group of about 85 mostly freelance foreign journalists, has recently undergone a change in leadership and, perhaps, a shift toward respectability. While the Globes have in the past been known for curious nominees like “The Tourist” and “Salmon Fishing in the Yemen,” this year’s nominees were seen as without such oddities.