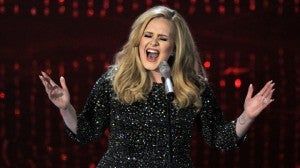 Singer Adele performs during the Oscars at the Dolby Theatre on Sunday Feb. 24, 2013, in Los Angeles. Chris Pizzello/Invision/AP

Three years after its release, the album, Adele’s second record, continues to have robust sales and so far has shifted 26 million copies worldwide.

A Nielsen spokeswoman confirmed “21” had passed three million digital sales in America, building on its top-selling global status in 2011 and 2012, on the back of the singles “Rolling in the deep” and “Someone like you.”

The 25-year-old singer enjoyed an outstanding 2013, winning the best original song Oscar for the 007 movie theme tune “Skyfall,” at the 85th Academy Awards.

In 2012, “21” won six Grammy awards, though the singer has experienced some problems with her voice in the past year. According to Rolling Stone, the London-born artist is currently working on a new album.