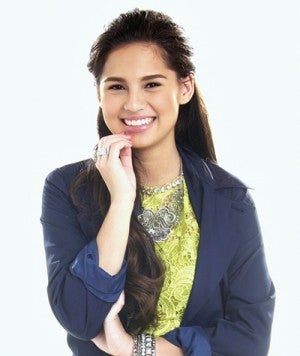 FOR HERSELF, Jasmine Curtis-Smith hopes a proposed project with Nora Aunor pushes through.

Actress Jasmine Curtis-Smith would rather not involve herself with issues confronting her big sister Anne, who reportedly caused a commotion in a bar late last month. The incident was none of her business, Jasmine said.

“I wasn’t there and I don’t know the details. I have no right to talk about it,” the 19-year-old TV5 talent told a recent media gathering. “As for my personal opinion, sa amin na lang ’yun ni  Ate.”

Jasmine did say, however, that Anne was deeply affected by what happened. She said her sister was trying her best to move on and stay positive.

“But I was there for her. One night we had dinner and watched all her favorite films together,” related Jasmine, who had no clue about the controversy until news about it broke.

“She just wants to forget about it, and so do I,” Jasmine stressed.

Did the incident make her more wary of her own actions in public? Jasmine replied, “What happened was a lesson learned for everyone involved… We’re all human.”

Meanwhile, Jasmine just inked a new three-year contract with TV5. Though other networks “wanted to talk,” Jasmine said she chose to stay with TV5, because the station remained supportive of her, though she prioritized her studies in the past year.

Immediately forthcoming for Jasmine is an hour-long weekly drama series to be directed by Mike Alcazaren, who also worked with her on one of this year’s CineFilipino entries, “Puti.” Jasmine and Wilma Galvante (TV 5 content officer for entertainment) have also revealed plans to do an indie film with actress Nora Aunor.

“That’s something I hope will push through. It would be nice to learn from her,” Jasmine said.

Her career is on the upswing, and Jasmine couldn’t be happier. After winning best supporting actress in this year’s Cinemalaya Film Festival for the movie “Transit,” not a few remarked that Jasmine was a better actress than Anne, who also bagged a couple of acting awards in the past.

Jasmine explained: “People will always have their own opinions. It took Anne a long time to get to where she is now. And I was so lucky to have the advantage of having her as a mentor in this business. I just don’t think I’m better; I still  have a lot to learn.”

Summing up 2013 so far, she said: “Career, personal life… everything has been fruitful.”

Her goal for next year is, simply, to continue learning and honing her skills.