Bamboo Mañalac hopes to collect a thousand toys for young survivors of Supertyphoon “Yolanda” through a repeat of the benefit concert, “BELIEVE: Christmas @ Home with Bamboo,” 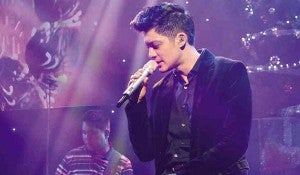 at the Music Museum tonight.

“Let us [show] them that they are not forgotten and that there is hope for them,” he told the Inquirer in an exclusive interview after an earlier concert on Dec. 6.

The repeat is exclusive for Globe Community members and [email protected] subscribers. Bamboo explained: “Drop by at any Globe outlet or Ticketworld and buy toys. For every two toys purchased, you will receive one ticket for tonight (show starts at 7:30).”

Tomorrow, Bamboo will fly to Leyte and personally distribute the toys to children in Tattoo-Gawad Kalinga villages in barangay Tambulilid, Ormoc. Smiling, he said, “I’ll play Santa; I think it will be great. ”

Crowd reaction to Bamboo’s unique renditions of classic Christmas carols in his recent show was ecstatic. He revealed that a Christmas album was in the works, for release next year.

He elaborated: “I love Christmas; I take it seriously. You can’t just copy Christmas songs. You have to give them your own twist, make them your own.”

Christmas for Bamboo means spending time with family and friends. “I want to make people smile. On the other hand, I just wanna hang out with family.”

He remembers Christmases with his lolo when he was a kid. They would  listen to holiday songs by Frank Sinatra and Nat “King” Cole “while we have merienda and sip wine. Those are my early memories. That’s why Christmas and music mean so much to me.”

He said he would record the Christmas album in the United States. “It’s gonna be a bit of rock,  folk,  pop but it will still be pretty much the music I like. That means something warm, something colorful.  ”

When people call him “The Prince of Rock,” how does he react? Bamboo’s reply: “I hide behind a rock somewhere. I’m just thankful… and humbled.”

As for a possible reunion concert with his former band Rivermaya, he said: “Reunions and singing old material, I’m not a fan of that. I’ll never say never, but I’m pretty sure a reunion’s not going to happen anytime soon.”

He did seem interested in seeing himself and his former band mates exchange fresh ideas, and actually said this might in fact start something good.