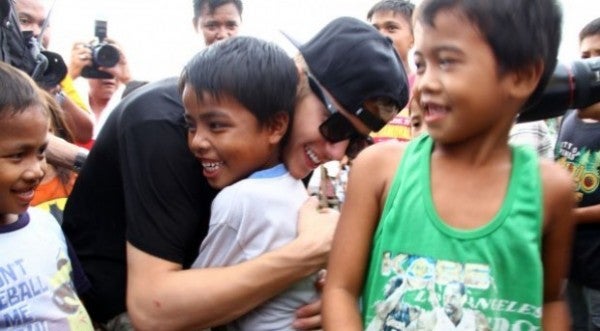 Celebrity website www.prizeo.com, which hosts the Beiber fundraising drive, indicated that as of 9 a.m. Saturday – a day before the campaign ends – the drive has already netted more than $800,000, with fans and non-fans alike across the globe pitching in any amount they can afford.

The Canadian government announced it would match the donations sent in by its citizens while Action for Hunger said its patrons would give $250,000.

Bieber, along with representatives of the United Nations Childrens’ Fund, Action for Hunger and Philam Foundation, recently visited Yolanda-hit areas and performed for children in Tacloban City.

“When I saw what happened in the Philippines, I was shocked — the destruction was devastating and I wanted to do whatever I could to help,” he said.

Bieber said that, counting on his fans, he started “planning a way for us to make a big impact to help our friends in the Philippines together.”

The Canadian teen sensation, who started his singing career on the video-sharing site YouTube, also offered those who will contribute to his fund-raising drive a chance to “hang out with me in the studio.”

He said this would be the first time that a fan would watch his every move while recording songs in the studio.

“I’m doing something I’ve never done before: for just a tiny donation to the relief effort, you’ll be automatically entered for a chance to hang out with me in the studio early next year and watch me record some new music. I’ll fly you and a friend over to join me in LA from wherever you are in the world. It’s gonna be awesome,” he said on prizeo.com.

“This is something I’ve never done before, and I’m so excited to hang out with one of my Beliebers,” he added.

Chezsa Juna Garcia Sanchez-Idul, a Filipina, posted on #GiveBackPhilippines that she was not a JB fan.

“I’m not a JB fan but what he did for the people of Tacloban is priceless. We do have a lot of Filipino artists but only few gave their time and effort to really go to ground zero to help,” she said.

“Justin is earning respect from the Filipinos for what he did in Tacloban. A JB fan or a non-JB fan should salute him,” Facebook user Astroplus said on #MaramingSalamatBieber.

The most notable admiration for Beiber, perhaps, was from another Facebook user ChrisTian Madula.

As of Wednesday, hashtag #MaramingSalamatBieber was the top trending hashtag in the Philippines.
Bieber said the money raised from his fund drive would be administered by Unicef, Hunger Action and Philam Foundation.

Apart from the chance to hang out with him, donors would be receiving items from Bieber.

For those giving $10 via the online fund-raising drive, they will be emailed a special pre-recorded “thank you” video. Those giving $25 will not only get the pre-recorded video but will also get “campaign bracelets,” which are “not available anywhere else!”

Donors who send in $750 will also be sent a signed exclusive Justin Bieber Philippines OnePiece, created specially for the campaign, a signed One Less Lonely Girl lyric sheet, signed photo of Justin in the Philippines, the campaign poster, T-shirt, bracelet and video message.

This is to “mark your incredible generosity,” Bieber said.

“You will become a Star and you will get 750 chances in the draw for the one on one encounter with Bieber,” prizeo said.

All donations via the online campaign may be paid through major credit cards or Paypal.