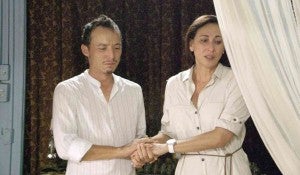 EPY QUIZON (left) and Cherie Gil got to work with students on “Mana.”

The idea was to get the entire Benilde community involved in a filmmaking project. After all, it usually takes a village to create a work of art.

This year, the college decided to produce a feature film for its 25th anniversary.

Fernandez won the pitch and Benilde awarded him P3 million to make his movie, “Mana.”

“We wanted to involve not just film… but as many departments as possible in this project,” explained Robert Tang, vice chancellor for academics.

“Students from the production design, technical theater, photography and arts management programs were tapped for the movie,” Fernandez recalled.

Other members of the Benilde community were recruited as well. “We conducted open auditions among the faculty and staff for some of the roles,” Tang recounted.

Fernandez regarded the project as a chance for students to work on an actual movie set that follows current industry principles and practices.

“Our students would get to work with and learn from professionals, both in front and behind the camera. They will get exposed to the discipline and the standards of excellence in the industry,” Fernandez said.

In casting the film, Fernandez got all the actors he wanted by simply texting them.

It helped that some of the actors were La Salle alumni: Mark Gil, Epy Quizon and Jaime Fabregas. While the others were friends and artists he admires: Fides Cuyugan-Asensio, Ricky Davao, Tetchie Agbayani and Cherie Gil.

“Our students got star struck working with [siblings] Mark and Cherie, but soon enough they realized that they’re people, too,” Fernandez related. The stars were not treated like divas. “It was a no-ego set.”

Fernandez hoped the students would realize it was possible to maintain one’s values while working within the highly competitive movie industry.

Fernandez also turned to his friends, who happen to be some of the best artists and technicians in the movie industry: Rodel Cruz for production design, Lee Briones for cinematography, Lawrence Fajardo for editing, Marilen Magsaysay for color grading and Von de Guzman for music scoring, among others.

“When we were conceptualizing this project, I told Gabby that we wanted a film that would make a strong statement on society,” Tang remarked.

“I didn’t want to make an institutional or a religious film,” Fernandez owned up.

It seemed that the easiest part of the entire process was coming up with the story.

“Mana” is a family drama-thriller that centers on a dying matriarch who must pass on her otherworldly “power” to her unwitting and unwilling children.

“Mana,” Fernandez explained, is the expanded version of an earlier work of the same title that was nominated for best short film in the critics’ Gawad Urian Awards in 2011.

He is keenly aware that the movie can be interpreted as a searing critique of dynastic politics, a timely subject.

“My mentor (filmmaker) Peque (Gallaga) said it’s best to leave it to the critics to dissect the film,” Fernandez quipped.

More than anything, “Mana” has proven that an educational institution can collaborate with the movie industry, said Fernandez.

“It is envisioned as a laboratory for students to put into practice the theories they’ve learned in the classroom,” Tang said.

They hope “Mana” will serve as a “template” for future collaborations between DLS-CSB and other indie filmmakers—not only in making a movie but also in marketing and distributing it.

“We are open to releasing it theatrically but we also plan to make the rounds of the festival circuit,” said Tang.