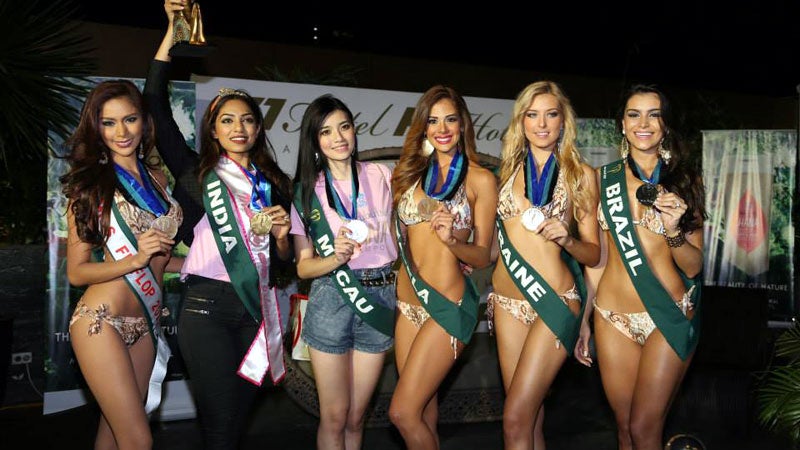 MANILA, Philippines – The Miss Earth pageant is going places. For the first time in its 12-year history, the Philippine-based international competition will be seen live in select Latin American countries, as well as in some parts of the United States.

Lorraine Schuck, Executive Vice President of pageant organizer Carousel Productions, said a Venezuela-based television firm struck a deal for the coronation night’s live telecast in the pageant-crazed South American country, as well as in other nations in the continent.

The company shall also beam the final ceremonies in several states in the US.

Cable channel Star World has been beaming the global pageant’s coronation night to Asian countries for several years now, and the new deal for Latin America further expands the reach of the competition, which started in 2001.

Schuck also revealed that a Chinese TV network is currently negotiating with Carousel to have the finals night telecast live in the world’s most populous country.

“I hope if not this year, we get to air live in China next year,” said Schuck.

She said the pageant’s expanded reach would be very helpful in its quest to promote environmental awareness.

“Since day one, the pageant was a rally for the betterment of our environment. So all events that we’re doing, since 2001, is really for promoting environmental awareness,” explained Schuck.

She also related the competition to the recent calamity brought by Supertyphoon “Yolanda” last month, and said “It’s timely that we have Miss Earth here. People who usually don’t listen, who are not aware, may now start listening.”

“The Miss Earth pageant will make the world know that these calamities happen because we are not taking of the environment. Everything is related to the environment—global warming, climate change, the tilt of the planet shifting,” Veneracion noted.

She added: “Typhoons have become stronger and places not usually visited by storms are now experiencing disturbances because of all the changes in the environment. And we are partly to blame because we are not taking care of the planet.”

Miss Earth delegates from different parts of the world have taken part in relief operations for Yolanda survivors. Aside from helping sort, pack and distribute relief goods, the candidates also spent time with the survivors who flew in at the Villamor Air Base in Pasay City.

The Philippines’ representative, Angelee Claudett delos Reyes, said taking time to hang out with the survivors was a “rewarding and heartwarming experience.”

“On our way there, our general sentiment was sad. They’ve been through a traumatic experience. But when we arrived, the mere presence of the Miss Earth delegates put a smile to the survivors’ faces. They were thanking us for coming over,” said the 26-year-old nursing graduate from Olongapo City.

She said the experience made her “feel more blessed now. I keep on praying for them, for the repose of the souls of those who did not survive, and for the quick recovery of those who survived.”

Veneracion also said that the pageant, through the Miss Earth Foundation, was also partnering with ABS-CBN’s Sagip-Kapamilya Foundation to help in relief operations.

There was also one delegate who directly contributed to Sagip-Kapamilya, Veneracion revealed.

Eleven of the past 12 editions were held in the Philippines, and the coronation ceremonies featured several tourist spots in the country. The delegates have also visited some of the country’s best destinations.

Schuck said this was made possible out of the goodwill of their friends from different local government units and in private companies.

“We wish the Department of Tourism would be a part of this project,” she said.

She said having the pageant telecast around the world helps showcase the Philippines and boosts its tourism in many countries.

“Millions of people are tuned in to the pageant. And now we will be seen live in Latin America and the US,” Shuck noted.

Veneracion appealed to Filipinos and the national government to support the Miss Earth pageant.

“The Miss Earth is among the three top international pageants, along with the Miss Universe and Miss World. We have the support of big national pageant organizations in many countries and is one of the most anticipated televised beauty competitions,” she explained.

“When the Miss Universe was held here, the national government had to pay for the rights. Now we have our very own international competition, the Miss Earth, which is as prestigious and is seen around the world,” Veneracion noted.

“Also, we bring the candidates to some of the country’s best destinations. By word of mouth, they can help promote the Philippines in their own countries,” she added.

And to further establish the Miss Earth pageant as a world-class international competition, this year’s presentation will feature video mapping components to render a hi-tech feel to the ceremonies.

The 2013 Miss Earth coronation night will take place at the Versailles Palace in Muntinlupa City and will be hosted by British actor-model Oli Pettigrew and his American wife Linda Black from HBO and Discovery Channel.

The finals night will be telecast live in the Philippines and other Asian countries via Star World on December 7, 8 p.m., and will be later seen on ABS-CBN on Dec. 8, before “ASAP XVIII.”

It will also be beamed live to select Latin American countries and several US states and will be seen on a later date in Europe and in Africa.