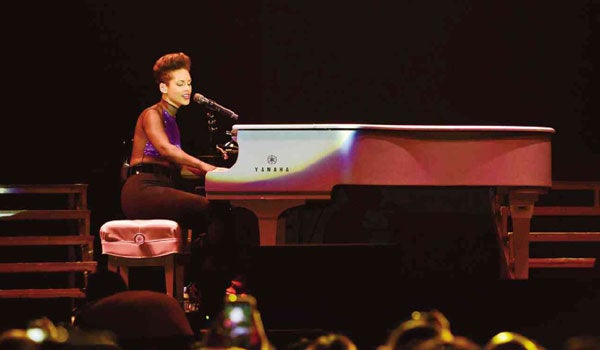 US R&B star Alicia Keys has been touring the world, using her music to drive messages of self- and women empowerment.

The words “invincible” and “unbreakable” took on a new meaning in a concert that, she said, left her just as inspired as the thousands she performed for at the SM Mall of Asia Arena recently.

Keys, who last headlined a Manila show in 2008, said she had planned for quite some time to return. “Every time we come together, there’s this incredible mixture of music and people—we just understand each other. But the devastation of (Supertyphoon) ‘Haiyan’ (Philippine name: ‘Yolanda’) made this trip even more purposeful for me,” she said.

Just hours before the concert, the Grammy Award winner visited supertyphoon survivors from Samar and Leyte at the Villamor Air Base processing center. For about half an hour, Keys reportedly went around chatting with the people, giving children books and crayons.

“I’m so moved and touched to be with you tonight; I mean it. I can’t describe what I’m feeling right now,” Keys, 32, told an appreciative crowd. She announced that “New Day,” a track from her record “Girl on Fire,” will be a part of “Songs for the Philippines”—an all-star, iTunes compilation album that has raised funds for the Philippine Red Cross.

As for the concert itself, Keys was just as generous with her music, performing around 20 hits culled from her five studio albums. Whether she tackled a gritty hip-hop tune or a soulful ballad embellished with trickles of classical piano, Keys every so often engaged the fans in chatter about growth and overcoming challenges.

Wearing tights that hugged her curves, left hand on her hip, Keys emerged onstage to a mashup of “Streets of New York” and “Empire State of Mind,” which she followed with “Karma” and a head-bobbing mishmash of heavy hip-hop beats, horns and violin. While not the most explosive dancer out there, Keys seemed less inhibited than before, swaying sinuously with a small crew of male dancers.

She then sat at the piano and, with a tinkling of the ivories, tempered the initial heat with the breezy “You Don’t Know My Name.” It was playful, almost flirty.

There was a noticeable straining when she reached for the high notes in more vocally-demanding numbers— “Girl on Fire,” “Fallin”—which nonetheless sparked enthusiastic sing-alongs.

The piano intro to “If I Ain’t Got You” drew a deafening roar of approval. The decibels escalated when, midway, Regine Velasquez got up on stage and shared the spotlight with the international superstar. They were feted with a standing ovation after the rousing duet.

The excitement significantly picked up after that; nearly the entire crowd was on its feet. “No One” began subtly and then peaked with an explosion of thumping beats. Then another surprise: Apl.de.ap, spitting out bars from The Black Eyes Peas hit “Where is the Love?”

Finally, Keys changed to a sparkly black gown and performed “Empire State of Mind (Part II: Broken Down)” to end the evening. “We can’t do things by ourselves—we need each other,” Keys told the crowd. “Thank you for all the love. You are incredible!”

“Set the World on Fire Tour: Alicia Keys Live in Manila 2013” was presented by Ovation Productions and PLDT Home Fibr.