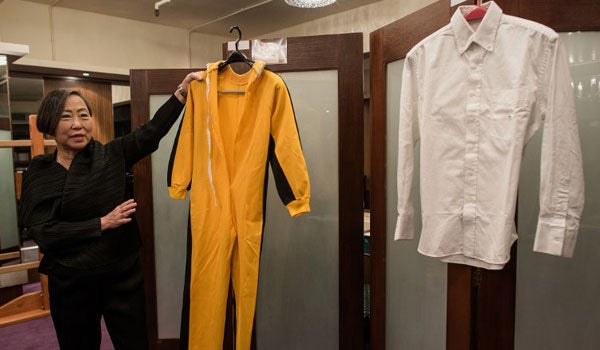 Spink auction house vice chairman Anna Lee briefs the press on a jumpsuit worn by Bruce Lee during the filming of ‘Game of Death’ in 1972 during a preview of the Bruce Lee 40th anniversary collection auction in Hong Kong on December 2, 2013. AFP

HONG KONG — Bruce Lee fans who covet the original yellow jumpsuit that the martial arts legend wore onscreen will get a chance to bid for it at a Hong Kong auction this week.

It’s part of a collection of 14 items including clothing and props going on the block on Thursday.

Lee wore the yellow suit, with black stripes down the sides, in “Game of Death.” The incomplete film was released in 1973.

The auction house said Lee gave the items to his friend and former student Taky Kimura, who sold them to the collector.

Spink said the unidentified collector decided to sell the items this year, which marks the 40th anniversary of Lee’s death.