“I’m a one-movie kind of guy,” said Ang Lee. Though it sounded like a joke, it was really a way of sharing yet another piece of himself with a rapt audience at the open forum that highlighted a tribute in his honor on Thursday.

“I’m not one of those directors who always have a lot of films in development. I never do that. I don’t read [every single] script sent to me, unless Brad Pitt is attached to it.” That’s because, the multi-Oscar awardee said, “Each movie is an extension of me.” 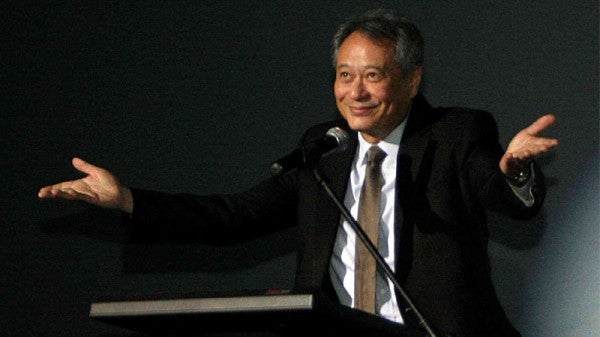 LEE SAYS HELLO“I feel like your next-door neighbor. On clear days while shooting ‘Life of Pi’ in Taiwan, we could see the northernmost tip of the Philippines.” Photo by Kimberly de la Cruz

Thus, “A Salute to Ang Lee” rolled out, with the celebrated cinema master saying he’s really just a slave of the craft, gracefully parrying pointed questions, imparting enough wisdom for a full university course in cinema, or one in the humanities. All these in an unhurried, thoughtful manner.

He spoke softly and smiled a lot; it seemed at times he was self-deprecating, but his listeners knew instinctively to catch every word, or miss out. Addressing young filmmakers, Lee laid himself out as a simple, but succinct, example: “I am possessed when I am making a movie. A couple of times, a movie that I didn’t want to do [ran after] me. I said, ‘Go away, leave me alone.’ But I couldn’t stay away. Unless you feel that way, you shouldn’t be making films.”

The first Asian to win an Oscar for best achievement in directing (2006, for “Brokeback Mountain”), and certainly the first Asian to do that twice (he won again early this year, for “Life of Pi”), Lee piqued his audience by saying a filmmaker need not adjust to Hollywood. 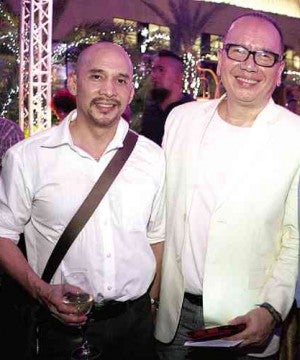 “Hollywood changes filmmakers,” he said. “It’s painful. There were times I was working in China and the Western press asked if I had freedom, expecting I’d say no. I got irritated. The most un-free place to make films in, is America [because of] the Establishment—financial, ideological.” He’d like to turn away from that, said Lee, “But you can’t ignore it. So you have to negotiate, adapt.”

The last thing he wanted was to be boxed in as a “Hollywood” filmmaker, he said. “I don’t want to be categorized. I’d like to stay free to express myself. I don’t like boundaries.”

A card-carrying Lee fan, Ambassador Raymond LS Wang of the Taipei Economic & Cultural Office in the Philippines (which mounted the two-day tribute event), in fact pointed out in his welcome remarks: “From helping shape the Taiwan film industry, Ang Lee proceeded to conquer world cinema. His work will certainly transcend time and influence future generations [because] he is not afraid to [switch] genres—romance, family drama, comedy, superhero films, martial arts, fantasy, etc.” 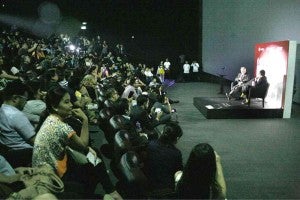 AUDIENCE composed of Filipino indie and mainstream directors, media people, film critics and fans hang on to every word. The discussion was a veritable master class in cinema. Photo by Kimberly de la Cruz

File under “etc.” what Lee declared his “biggest success” in America, “Brokeback Mountain.” He recounted, “After ‘The Hulk’ (2003), I wanted to retire. But I didn’t want to end my career with a big, angry, unsuccessful film. So I made a film about gay cowboys.”

And that was just because the short story it was based on made him cry.

He reverted back to being an “outsider” to make “Brokeback,” he said. “I didn’t know about gay cowboys; I was a foreigner in the US. But I had long realized that being an outsider was an asset. I could be more objective, and therefore more accurate. I did a lot of research.”

“Brokeback” brought Lee to one conclusion: “Ultimately, a movie is not a statement; it is a provocation.”

“Life of Pi” brought him another realization: “I need only to express myself, and I will find my audience.”

US advisers didn’t like the ending, Lee said. “They wanted the tiger to look back; otherwise it was too sad, they said. But it clicked with Asians—we love sadness—and the rest of the world got it, too. The movie did better [at the box office] in China than it did in the US. It even did well in Russia; I never saw Russia as a market before that.”

“Life of Pi,” about a shipwrecked boy who spends 227 days on a lifeboat with a Bengal tiger, technically falls under the adventure-drama genre. Lee calls it a “magical, spiritual journey.”

Overall, the discussion was free-wheeling but thoroughly insightful. Lee unblinkingly tackled everything that was put on the table. He talked about his hits as much as his flops, his gifts as much as his insecurities. Sometimes tongue-in-cheek, but with a sharp ring of truth: “In the beginning, I didn’t know how to talk about my films. But I became good at it. After answering the same question 1,000 times, I begin to believe what I’m saying.”

An exciting announcement made during the forum was that Lee was set to do a movie in the Philippines. “A boxing drama,” it was quickly whispered about.

Earlier reports did mention a film that would “trace 3D depictions of classic bouts, such as the Ali-Frazier ‘Thrilla in Manila’ in 1975.” 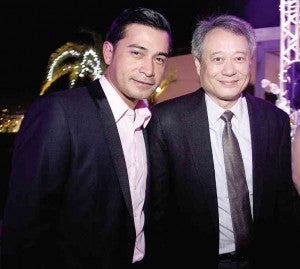 Certainly, “Thrilla” wasn’t the only thing that Lee had known about the Philippines before he finally set foot in the country for the first time last week. It wouldn’t have merited the two times that, he said, “Manila” was mentioned in “Life of Pi.”

His first words to the fans in his pre-forum address (after the screening of “Life of Pi” at the SM Aura IMAX) were: “I feel like your next-door neighbor. When we were doing  ‘Life of Pi’ in Taiwan, on clear days we could see the northernmost tip of the Philippines. I’m happy to be here, finally.” The theater had erupted in applause and cheers.

The amiable, acutely-aware cinema master-slave left Saturday. Having met fellow filmmakers here and put a face on his faithful Filipino following, he was sure he’d be back.