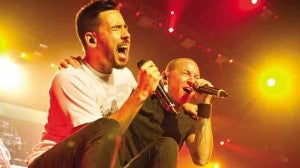 I will always hold Linkin Park in high regard. Even now when I listen to my old CD of ‘Hybrid Theory,’ I still find that debut album from the band to be very impressive even by today’s standards. But beyond the nostalgic hold that piece of music has on me, it is a reminder of how much the music of Linkin Park has changed through the years.

With the ever evolving music of Linkin Park, nothing seems to stand still for them. It seems that the members of the band are always on the go and in search for new side projects and other avenues to channel their musical creativity.

Hence, some listeners’ preference for Linkin Park have changed likewise over the years. And it is precisely because of the continuing “evolution” of the band’s sound that some fans can even say that Linkin Park’s music no longer appeals to them now–they, who had once belonged to the original core fan base many, many years ago during the boom of the Nu-Metal scene.

Speaking of that (Nu-Metal) movement, even now when you speak about it, it almost seems childish to some, and even laughable already. On the contrary, though, I always believe it is much better to be remembered for being at the forefront of a movement rather than just for tagging along and merely imitating others’ works to fit in so that it can be said you had also been a part of that said movement.

That is where the root of originality also comes from in popular music–when you can help start a whole “revolution”—if you will—that will get every other band involved and wanting to do what you are doing and wanting to sound exactly the way you do. That is why I consider Linkin Park to be one of the originals!

I think to pass judgment on that said movement (Nu-Metal) based only on what you have learned now about it from research and reading others’ works on it are all “secondary” knowledge. I find those self-professed suddenly “know-it-all” remarks from those who have had no backing whatsoever on that movement to be baseless and uneducated, at best. Because it is entirely different when comments come from those who have actually been active participants of that movement—whether as musicians or as avid fans of that particular music scene during those years—the latter group know whereof they speak !

Each time I decide to listen again to the music of Linkin Park, each new album of theirs sounds different from their last one. When I purchased a copy of their album ‘Living Things’ around a year ago, right away I noted the changes in their sound when I began listening to the first couple tracks in it. Were it not for the distinctive voice of Chester Bennington, I would have assumed that I wasn’t listening to a new album from Linkin Park at all!

It is this factor–the major changes to their sound that have kept the band from sounding dated. Linkin Park is now more adventurous in exploring other genres,

namely EDM. And because of this, their music has become more complex than ever.

In a way, they have not only managed to remain relevant and current. They have successfully gotten out of being stereotyped into one genre.

That is reinvention right there!

Linkin Park has done more than to keep up with the times. All they have done thus far shows the band’s desire to continually keep reinventing themselves—ever mindful though not to stray too far away from current mainstream for a particular given period while at the same time keeping themselves ahead of the game and above the throng.

There is that “hunger” that exists among the band members–especially for Chester Bennington and Mike Shinoda—to keep exploring other available avenues for their music. Such as the case with Chester Bennington who was chosen a while back to be the new front man for Stone Temple Pilots. (I wrote about this several months ago in my article entitled: “Chester Bennington conquering a ‘New Divide’.)

Instead of these other music-related endeavors distracting the band members from their own band Linkin Park, all of their side projects and collaborations with other artists have only recharged them more to bring back the focus on their own band itself.

We see other bands taking extended breaks to recharge their creativity and to prevent themselves from getting burned out. In the case of Linkin Park, however, when the members of the band do take a break, they still keep themselves busy and preoccupied outside of Linkin Park with other endeavors that revolve around music.

But always, and ultimately, their main priority and focus always go back to that of

Speaking of the band being recharged…

Linkin Park has just released their second remix album aptly titled ‘Recharged.’ It features big names from the EDM scene like Steve Aoki, DirtyPhonics, and Tom Swoon and other artists, too, giving their own re-interpretations and re-imaginings of all tracks from Linkin Park’s previous studio-release ‘Living Things.’

Even if perhaps you are not a fan of Linkin Park now, it wouldn’t hurt to listen to their music every now and then. We don’t know how much longer the band will continue to be around.

The album is already currently available in your favorite record store outlets in the Philippines.