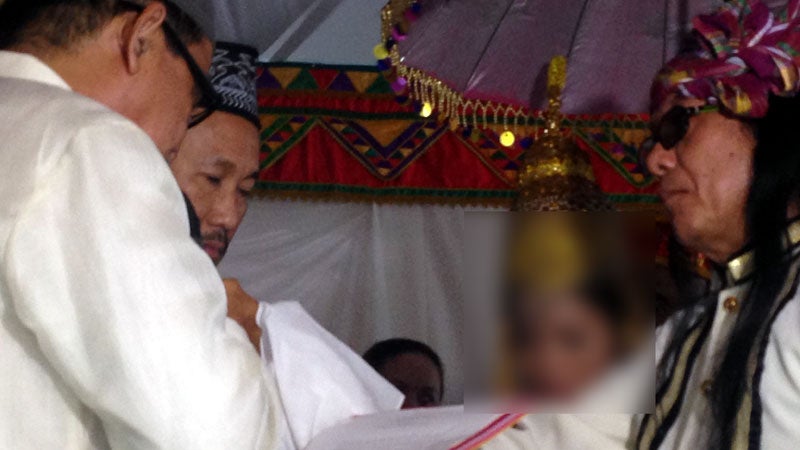 Freddie Aguilar and his bride during their Muslim wedding rites. Photo by Allan Nawal

BULUAN, Maguindanao – The crowd waiting inside BBMG Restaurant here turned toward the doorway as the emcee announced the arrival of Freddie Aguilar.

In dark sunglasses, the folk singer strode in, wearing a tubao on his head and a silky white long-sleeved shirt accented with black and gold. He and his retinue headed straight to a stage where he waited for his bride, a 16-year-old girl from Oriental Mindoro.

It was 4:36 p.m., more than an hour behind schedule for the Muslim wedding which the 60-year-old folksinger agreed to be officiated here after he and his girlfriend converted to Islam so they could get married. Philippine law requires a girl to be at least 18 years old to get married whereas Muslim Sharia law requires only that a girl be in puberty. 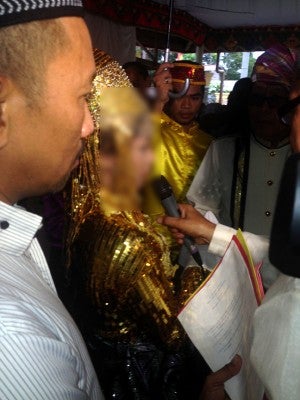 Freddie Aguilar and his bride during their Muslim wedding rites. Photo by Allan Nawal

Aguilar, according to Maguindanao Gov. Esmael Mangudadatu, will be known henceforth as Abdul Fared while his bride also adopted a Muslim name—Sittie Mariam.

Mangudadatu said he had personally suggested to Aguilar that the wedding be held here.

At about 4:45 p.m., the bride arrived and was fetched by Mangudadatu, who acted as the “wali” or godfather. He also earlier adopted Sittie Mariam as his daughter so he could give her away to the groom in the absence of the girl’s parents.

Wearing a gold-colored silk gown and a Thai-inspired headdress, a beaming Sittie Mariam casually walked toward the stage, where Aguilar waited.

“She’s really in love with Freddie,” a woman murmurred as the bride moved closer to the stage.

At about 4:55 p.m., the ustadz assisting in the wedding of Aguilar asked Mangudadatu if the union had the blessings of the girl’s parents.

In response, Mangudadatu took out a piece of yellow paper, which he said contained the consent that the bride’s parents had written.

“If it was not for this, this marriage would have not taken place,” Mangudadatu, smiling at the crowd. 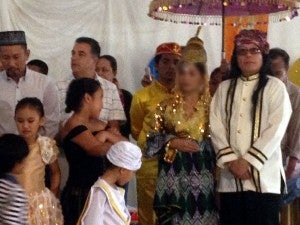 The couple listens as an ustadz recite koranic verses and deliver sermon as a prelude to the wedding. With them is Godfather and maguindanao Gov Esmael Mangudadatu. Photo by Allan Nawal Inquirer Mindanao

“They have our support and blessing,” Mangudadatu quoted the girl’s father in the note.

Aguilar was obviously ecstatic and replied “yes” after Mangudadatu asked if he had come voluntarily to wed the girl and if he was serious about his marriage.

Sittie Mariam said she was willing, too, and nobody had forced her.

Asked if she would be a good wife, she responded, “Insha Allah (God willing).”

It was five minutes past 5 p.m. when Aguilar planted a kiss on Sittie Mariam’s cheek. The crowd cheered.

In less than 30 minutes, Aguilar and Sittie Mariam were legally married – under Islamic rites.

Aguilar was thrown back into into the limelight when he broke the news he had a teenaged girlfriend and that they planned to get married. He was widely criticized as a child exploiter and was even charged by a private lawyer with the little known crime of “qualified seduction.”

Under Philippine civil law, a 16-year-old girl is not allowed to marry. But Maguindanao second district Rep. Sajid Mangudadatu said that in Islam, girls who have reached the age of puberty are allowed with their their parents consent.

“When a girl menstruates, it means she can already marry,” Representative Mangudadatu said.

In earlier news reports, Aguilar, who claimed to be a “born-again” Christian,  said he would do “whatever it takes even if it would mean converting into Islam” to marry his girlfriend.

He was also quoted as saying he had no problem changing religions because his fans and “big names” in the Muslim community had always been supportive of his controversial affair.

Aguilar was quiet most of the time during the wedding and did not comment on his choice of Buluan as venue for his marriage. He had said in an earlier news report that his grilfriend’s family had only one request, and that was that the wedding be in their hometown.

Aguilar had divorced her second wife, Antonette Martinez in 2005. His first wife was Josephine Ponce Queipo, with whom he has six children.

They lived together for 22 years before divorcing in London.

Governor Mangudadatu said he could not say where the Abdul Fared-Sittie Mariam relationship was headed  but he was hopeful that it would last.

He said he agreed to solemnize the wedding under Presidential Decree 1083 because he believed in the relationship of the lovers.

Mangudadatu said he also believed  that Aguilar’s conversion to Islam was for real and not just to be able to marry his girlfriend.

“Even as early as 2011, he already had an inclination to embrace Islam. That was prior to meeting the girl,” he said.

Mangudadatu said Aguilar would be accountable to God if his conversion to Islam was just for convenience.