Nikki Gil gets fit after breakup with Billy 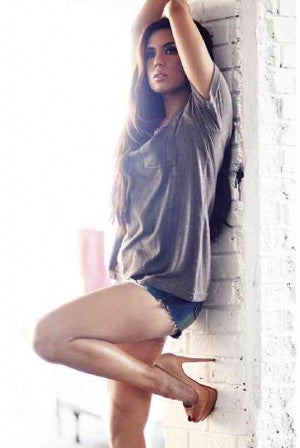 NIKKI Gil: “The right man for me is out there, I know.”

“Being bitter makes you ugly,” says actress Nikki Gil, who claims she has bounced back from her breakup with singer-actor Billy Crawford, her boyfriend of five years.

In a July interview on the Sunday gabfest “The Buzz,” Billy denied there was a third party caused the split. But snapshots of him kissing and hugging “It’s Showtime” cohost Coleen Garcia at an event in Bacolod City recently surfaced on the Internet.

Billy kept mum about it, but Coleen granted an interview with “The Buzz Ng Bayan” on Sunday. Coleen said Billy was just a “work mate” and that whether or not a romance was brewing was “too early to tell.”

During her launch as the newest endorser of clothing brand Maldita, Nikki, 26, told the Philippine Daily Inquirer, “I should be thankful… I believe an ex-boyfriend is always a step closer to whom you’re really destined to be with.”

The actress said she “successfully moved on” by focusing on work. She is in the cast of the ABS-CBN drama series “Maria Mercedes.” She added, “The timing was perfect. Work started right after we broke up.”

Filling the void was “surprisingly easy.” She and Billy were spending less and less time with each other, she revealed.

“Because I’m not the clingy type, I kept myself occupied when he was doing something else. I healed quickly because what happened was a gradual thing.”

She’s not ready to start dating again, “But I know he’s out there, the right one.”

Now that she’s single, would she be a little more daring on television and in the movies? “It’s not like I’ve never worn sexy clothes!” she exclaimed.

Just the same, Nikki said was more confident with her body now. “I have gone back to the gym. I also watch what I eat now, and there’s a  conscious effort on my part to stay toned and fit. For me, ‘sexy’ is an aura. You can wear a plain shirt and jeans and look very sexy, and you can bare it all and only look repulsive.”