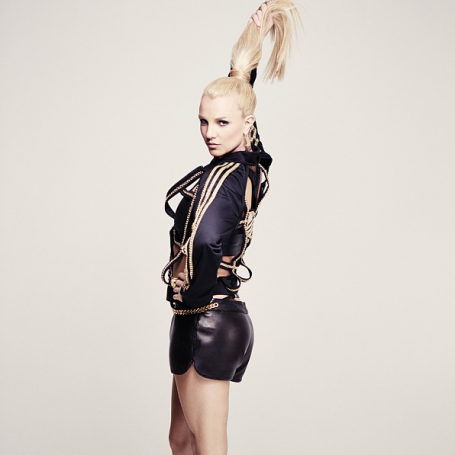 As I was listening to Britney Spears’ latest single “Work Bitch” the other day–yep, you read the title of the song right–admittedly, I had a somewhat high expectation that this would turn out to be a return to form or at least a new song from her that would match all the hype around it.

The thing is… after I was done listening to it, I muttered to myself: “This is bad !” And I don’t mean it in a satirical kind of way. In pop standards, this song doesn’t seem to be fitting even for the likes of a Britney Spears. Even if this single had come out, let’s say in the early 2000’s, when Britney was still at the top of her game and was second to none, I honestly don’t think it would have been a huge hit either. Why?

Lets get into the specifics as to why I have said this:

First of all, the people behind the boards in the recording studio namely, Will.i.am and DJ Otto, seem to have had all the control in the creative output of this single. Britney’s voice sounds secondary to all the “bleeps”, the fuzzy wall of sounds, and the EDM influences that overloaded this single into sounding like a one club-banger meant only for clubs and dance floors !

Secondly, when you hear and read so much hype that this single would “re-launch” and bring back some of Britney’s old glory… Oh my ! That is a mighty task to live up to and naturally, there will be more than a number of longtime Britney fans that would hope these could all be true and not just for publicity’s sake. Well, sometimes reality can be cruel and even harsh. But at the back of my head, I sort of knew all the hype I have been hearing about this single would be that… just hype.

Thirdly, EDM–and not just the movement itself–is starting to fizzle away and lose steam already. For her to jump in at this late stage of that music craze feels like “Britney is just joining in for the heck of it!”. Now, for the mixed reviews and some of the backlash that “Work B****” has gotten since it was released, those aren’t entirely Britney’s fault.

Music aficionados must remember that she is also just following orders and trusting advice given to her by management and not just from the producers of the said single. Because of course, and obviously, they are all after the best for her single to be a huge success. I mean, we are talking about Britney Spears here.

With my above-mentioned points, I would like to get to the “meat and bone” of the issue as suggested on the title of this piece. If we had the Britney Spears of old–even the post “Toxic” era one–would she have any of these problems right now with her latest single not garnering more interest from both random music aficionados and longtime Britney fans ?

Nope. Let’s face facts here. For nearly a decade from the late 90’s to the mid-2000’s, Britney was “THE POP STAR” of the entire world and she was “pop royalty”. There was practically nothing that she didn’t embark on music-wise that didn’t sell or make the label a ton of profit !

The music industry that had once embraced and made Britney the “darling of the entire pop world” seems to have now turned its back on her and treats her like a “has-been”. It is all because times have changed and so have the tastes of listeners.

The old saying that “fame is fleeting” is indeed true for most artists that have come out from their own respective decades except for a proven elite group that really are like ageless figures of popular music. To her credit, though, Britney Spears as an artist managed to make her career last longer than most of her harshest critics would have wanted it to.

When I reflect and just think of it… hey, I can say I am lucky to have witnessed the rise to fame of Britney and the prime of her professional career even though I was figuratively on the “other side of the fence” who wasn’t particularly fond of her. But we still knew deep down that her existence was important for a number of reasons and now it couldn’t be more obvious why !

I know that before–well, I speak for some of my generation–it was “cool” to hate artists like her. Hate seems like a strong word but this is being said from the point of reference of being a teenager back then. It just meant pop was like “kryptonite” for us then and all of us who just wanted to rock out and raise our “devil horns!”

But as you get older, you not only get wiser and you begin to recognize also  the kinds of artists that really left a permanent mark and artistic impression on the entire music industry, regardless of genres.

Britney Spears came before the Katy Perry’s and the Lady Gaga’s.