Stars align for Cinema One Plus 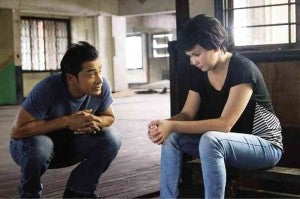 The five filmmakers who fielded entries in the Cinema One Plus section of this annual film event well knew the risks of hiring mainstream stars for their indie projects. Even so, they teamed up with actors who have shows in the country’s top three networks.

For “Alamat ni China Doll,” Adolfo Alix Jr. juggled the conflicting schedules of his three lead stars—Angelica Panganiban, Phillip Salvador and Cesar Montano—identified with ABS-CBN, TV5 and GMA 7, respectively. “Once the schedules were fixed,” Alix recalled, “the shoot proceeded without a hitch for six days.”

“I enjoy working with committed actors,” he said. “Angelica was like a sponge; she quickly absorbed the complex emotions required of her. Phillip, in spite of his stature, was eager to try new approaches to his role. Cesar is an instinctive actor; here we can see how the years molded him into a really fine performer.”

Alix pointed out that the script (a birthday gift from fellow indie filmmaker Lav Diaz) resonates with the caustic political issues currently plaguing the country. “It poses questions about the ‘truth’ that the government, media and society present to the public.” 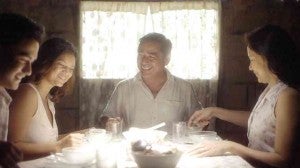 “There was this news item about fishermen who discovered a large cache of shabu floating in the sea,” Torre related. He thought the “drug scandal” that ensued bore the intricacies of a morality play, crossed with a gangster genre flick. “Some people may think my film was based on (the award-winning US TV series) ‘Breaking Bad.’ It’s not. My favorite movies are ‘Goodfellas,’ ‘American Gangster,’ ‘The Godfather.’ I wanted to make a film that echoes the same themes of greed, power, honor. Can a crime be justified because of poverty?”

Torre is a nephew of acclaimed actor Joel Torre, the lead star. “At first, I found it weird working with my uncle,” the director admitted. “But he trusted me 100 percent. I felt how much he cared for my film.”

The rest of the cast—Bernard Palanca, Art Acuña, Bing Pimentel, Ketchup Eusebio, Jomari Umpa and Meryll Soriano—were “darlings” as well. “They studied their characters. They didn’t crave attention and worked harmoniously with the crew.” 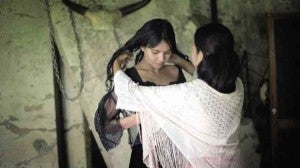 ALESSANDRA de Rossi in “Woman of the Ruins”

Keith Sicat likewise gathered a dream team for his entry, “Woman of the Ruins.”

“They are my muses,” he said of his cast, led by Alessandra de Rossi, Elizabeth Oropesa, Peque Gallaga, Joe Gruta, Chanel Latorre and Acuña. “They are actors I admire. They inspire me. I am eternally grateful that my first choices all said ‘yes.’”

He was awed by their total commitment. After all, it was not a breeze shooting in Corregidor, especially since two storms hit the island fortress during the 10-day shoot.

“Apart from their deep understanding of their roles’ psychological complications, the actors also embraced their characters’ physicality. I applaud them,” Sicat remarked.

He described his entry as a “cautionary tale” that “shows what happens when history is forgotten or erased, how societal expectations can imprison and enslave people.”

Mes de Guzman, big winner in the recent CineFilipino fest, made “Sitio” for Cinema One.

De Guzman summed up the film as a “barriotic psychological thriller,” a “new genre that I want to explore. It is faster-paced than my previous works.”

As usual, De Guzman set his latest indie feature in his home province of Nueva Ecija. “It is my interpretation of the Philippine countryside, far from the idyllic scenes depicted in Fernando Amorsolo’s paintings.”

He finalized the cast only three days before the shoot, De Guzman related. And then Northern Luzon was struck by a typhoon in the middle of filming.

The actors—John Prats, Arnold Reyes, Biboy Ramirez, RK Bagatsing and Jess Mendoza—rallied behind him. “As in my other movies, it was like playtime. No tension at all.”

Mike Livelo also had a ball shooting his entry, “Blue Bustamante,” despite a hectic eight-day shoot. “Hardest was shooting guerrilla-style in Japan,” Livelo said. “We were like ninjas 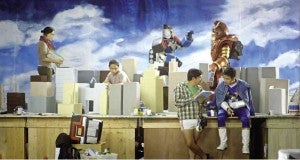 shooting on the sly. It was exciting, although I was afraid we’d get deported.”

Fortunately for Livelo, the film’s cast (which includes Joem Bascon, Jun Sabayton, Jhiz Deocareza and Dimples Romana) was game for anything. “They were the best,” he quipped, “but drinking bouts with them were tough.”

The film tells the story of an overseas Filipino worker who ends up playing a superhero in a Japanese sentai series.

Budget was a major hurdle, Livelo admitted. “It’s easy to write jokes and create miniatures and costumes… but the story required money.”

(The five Cinema One Plus entries each received a P2-million grant.)

Being a fan of the pop-culture staple made the struggles bearable. The film’s title is from a character that Livelo played in a short film he directed, “Epic 5.” The name stuck with him and he vowed to write a script about it.

The Cinema One Originals Festival is ongoing until Nov. 19 at TriNoma, Robinsons Galleria and Glorietta.