THE CANADIAN singer, who first performed at age 5, believes she was born to do what she is doing. AP

LOS ANGELES—“I’ve been in this industry for more than 30 years—if I am going to be nuts, I would have been crazy for a long time,” Celine Dion replied during an interview at the Waldorf Astoria Hotel in New York when asked what drives her crazy. The singer, known for being open and honest in interviews, wore a glittery silver dress by Rochas, her long hair flowing past her shoulders.

“I don’t like the industry that I am in. I don’t necessarily like to be part of show business. I think that’s a big part of my success as well.”

She clarified, “Please don’t get me wrong… I appreciate people’s concern, the love that they show, that they come to the concerts because we sell our image, songs, shows. We love the spotlight. We love to use acting or music to express ourselves. But you have to be born for that. I was born to do what I’m doing.”

The 45-year-old music superstar, married to her manager René Angélil since 1994, continued, “I understand why people ask for autographs so I am not letting this thing drive me crazy. Do you want to be known? Do you want to sell records? Do you want people to see your show? You can’t ask for people to leave you alone.”

Then she explained what she didn’t like about fame: “The tabloids, exaggeration, lies, things that sometimes cause… a little panic, not directly with us, but in our family, for example, my mom, sisters, brothers—people who are not in this industry who might think, oh my God, does this happen for real? It’s a lot of stress. [That’s] the Number One killer. Unfortunately my husband [goes] through a lot of stress; he’s the one on the phone all day. I am extremely lucky because I can just say yes or no to a song, sing my songs the best I can and raise my children in hopefully the best way I can.”

Celine took a break from her career when René, 71, suffered from throat cancer (he has since recovered).

Asked if their three children are musically inclined, she replied, “They (twins boys Eddy and Nelson) are only 3 years old. My oldest (Rene-Charles) is going to be 13. I know for sure that they are very musical. My oldest is into Eminem; the twins are into Blue’s Clues and The Wiggles. They move a lot, sing pretty much all the time. My oldest is into sports as well. I will be a good supporter of what they want to do.”

The multi-awarded singer, youngest of 14 children, grew up in a poor (by her own account) family in Canada. “I always appreciated life,” said the Quebec native who made her first public performance at age 5. “I realize what my parents (her father, Adhemar Dion, died in 2003; her mother, Therese, is 86) did for us because I’m a parent now. It gives me such a sense of appreciation when I remember my mom… It was very cold in the house. She opened the door of the stove [and] put a chair in front of the stove and put my little stockings [on it] to warm. I was  putting on warm clothes to go to school and having a piece of toast.

“[I remember] my mom making me warm before I hit the snow and walk 25 minutes to school. It’s an image I will never ever forget. We lived and grew up that way. I am just thanking life for giving me [such] parents and a family like that. Being balanced—it’s an everyday exercise. Every day, you have to kind of reset the clock. Things happen… some tension here and there. Don’t accumulate it. Every day, you have to think, am I feeling at peace with myself today? Do I have anything to fix? If today were my last day, is this the perfect day?”

On recurring themes—pain, hunger and love—in her songs that are often imbued with spirituality, Celine said, “[Being] an open book all my life has helped me tremendously. I talk so much that, when people write songs for me, they don’t have to meet me. They know me very well. They write exactly the songs that I want. We can talk about poverty, difficulties, divorce, wars, killing each other, a lot of things. But at the end of the day, love will always win for me.”

She continued, “No matter if it’s about a struggle, kids dying… I lost a niece a long time ago. She lost her battle against cystic fibrosis. She was 16. That was part of our journey, as a family. She was surrounded by love from day one [of her life], which was a short one. Some people have long [lives] but they are miserable. Some people have a short one, and it’s magnificent.”

Celine, who was raised a Catholic, reflected with gratitude about the people who helped her on the way to stardom. “I have been very fortunate… someone like me who didn’t go to school very long… people talked to me, gave me knowledge, took my hand, showed me the best, protected me. I did not learn all that myself. I learned it by living it, appreciating it, to feel good inside.

“And may I say, I am blessed. That may be a scary word these days. But people don’t use it [enough]. But I will say it, I am blessed. I am very spiritual. For me, that’s not necessarily an 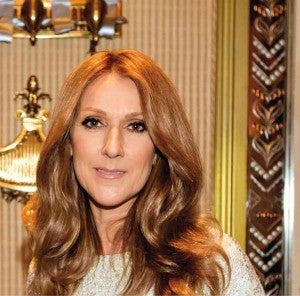 SHE DOESN’T care much for tabloids and other stressful aspects of fame.

association with Christ, the Lord. My spirituality is about feeling the best of me, doing good, helping. God for me is today, my children, sunset, sunrise, the ocean, birds, nature, the silence, what I can touch, feel and sense. I can still feel my dad.”

Celine elaborated further: “You don’t have to go on your knees. You [just] have to open up… say no to the things that you don’t want and embrace the things you want to take in. Believe in yourself, others, your children, marriage, your mom who’s getting older… talk to her and call her a lot. I’ll call her tonight. If something happens tomorrow, I would have talked to my mom. That is to be spiritual—to believe.”

On more mundane matters, Celine remarked that she doesn’t get to be in the kitchen (of her homes in Montreal, Florida and Las Vegas) often because of her hectic schedule. “I don’t cook a lot, not because I don’t like it [but because] the time that I have, I prefer to spend playing with my children. But I am pretty good with cooking and I am pretty good with leftovers.” She said with a smile, “I make them fabulous.”

No interview with Celine would be complete without talking about “My Heart Will Go On,” the theme from that movie which won an Oscar and became her signature song.

Celine did not like the song at first so she didn’t want to sing it. For some, it’s a schmaltzy song while for others, it’s a moving ballad. “I was happy that they didn’t listen to me, obviously. That proved to me that it’s important to be surrounded by people who know you so well… and it’s teamwork. It’s René who actually said to me, ‘We will just go to New York, do a little recording, very quick, just a demo and then we will see.’ The demo was the actual recording.”