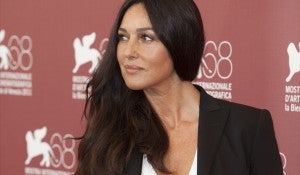 Actress Monica Bellucci poses during the photo call for her movie Un Ete Brulant at the 68th edition of the Venice Film Festival in Venice, Italy. AP

VENICE—Actress Monica Bellucci said her decision to appear nude in her latest film “That Summer” was an act of generosity.

Bellucci said the request came at a “fragile moment as a woman,” just a month and a half after giving birth. Bellucci said that when she accepts a role, she also trusts the director. She said she felt protected by director Philippe Garrel during the filming of the scene.

Bellucci shared the red carpet at the Venice Film Festival on Friday night with her husband Vincent Cassel, who appears in David Cronenberg’s “A Dangerous Method.”

Garrel’s “That Summer” also is in competition for the Golden Lion, which will be awarded September 10.