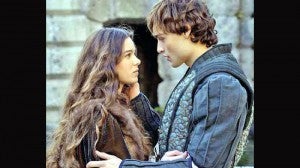 BOOTH AND STEINFELD. Cast as Romeo and Juliet, respectively, in latest adaptation of Shakespeare classic.

One of William Shakespeare’s most popular plays, “Romeo and Juliet,” has been performed for centuries all over the world, and has had at least five film versions.

George Cukor led off in 1936 with an acclaimed “filmization” that remains viewable despite the passage of many years.

In 1954, Renato Castellani directed Laurence Harvey and Susan Shentall in a British production introduced by no less than John Gielgud.

In 1968, one of the most memorable versions of “Romeo and Juliet” was directed by Franco Zeffirelli, who was known for his visual flair. Aside from its lovely images, the film was celebrated as a showcase for its agreeably young leads, Leonard Whiting and Olivia Hussey.

Zeffirelli’s version “reminded” everyone that Shakespeare’s young lovers were only in their early or midteens, and this made their tragic tale even more heartbreaking.

Arrestingly shot in post-modern MTV style, the ’90s version updates the story and is set in Miami.

Now comes the latest version, megged by Carlo Carlei, with the youngest lead players to date, Hailee Steinfeld and Douglas Booth. So, how does it fare compared to the previous productions?

It reverts to the traditional, pre-Zeffirelli and Luhrman approach, with its emphasis more on good storytelling rather than on visual pyrotechnics. Brisk but not hectic script editing and staging keep the action interesting. —But, after a while, the production’s more traditional approach starts to weigh it down, and makes it feel more stodgy than youthfully dynamic.

Booth is able to intone Shakespeare’s famous lines with appropriate style and unction, but Steinfeld initially comes off as too “contemporary” to seamlessly fit into the production’s  ancient, authentic locales.

However, toward the end of the storytelling, after Romeo is banished, she manages to amp up her performance to a more suitably intense, grand and felt level.

This new version should be seen by young viewers in particular, because its lead actors’ “authentic” youth makes the dramatization more empathetic and heartfelt!