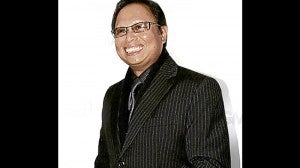 GMA 7 news anchor Arnold Clavio gets the flak from netizens and media critics after berating Lawyer Alfred Villamor, the counsel of Janet Lim-Napoles in her serious illegal detention case, in Tuesday’s episode of the morning show “Unang Hirit.” FILE PHOTO

MANILA, Philippines – After GMA 7 news anchor Arnold Clavio berated the counsel of detained businesswoman Janet Lim-Napoles on national television, the Movie and Television Review and Classification Board (MTRCB) called Friday the attention of the veteran broadcaster for his “rude language.”

MTRCB said over Twitter that it was summoning Clavio on November 11 to call attention to his “alleged rude language”.

The regulatory board also asked the producers of Unang Hirit to “wear the parent’s hat for Monday’s conference,” emphasizing that young people are part of the morning show’s audience.

“Per MTRCB records, Unang Hirit is a public affairs program and has a Parental Guidance rating,” it said.

Two days after the November 5 interview of Clavio with Villamor, the broadcaster asked the public to understand his manner of interviewing the lawyer of Napoles in her serious illegal detention case.

“Sa sidhi kong malaman niyo ang balita, inaamin ko po na lumagpas ako sa aking limitasyon at humihingi ako ng unawa kung may nasabi man akong na wala sa lugar. Maraming salamat po (Because of my intense desire to serve the public, I admit I went overboard and I ask for your understanding if I said anything offensive. Thank you so much),” he said in a public statement.

Clavio said he only intended to get information from Villamor regarding Napoles’ appearance before the Senate blue ribbon committee in its investigation into the pork barrel scam.

He explained that Villamor was the only lawyer they could talk to regarding Napoles’ hearing since lawyer Lorna Kapunan resigned as the counsel of the alleged mastermind behind the P10 billion pork barrel scam.

In the viral interview that drew flak from netizens, the news anchor got irritated over Villamor’s inability to answer his questions regarding Napoles’ pending hearing.

Villamor repeatedly told Clavio that he was not in the position to answer his queries since he only held the serious illegal detention case against Napoles.