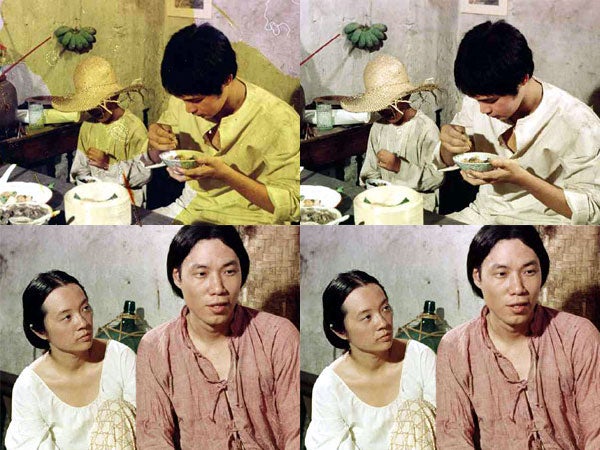 BEFORE AND AFTER Dranreb Belleza and Christopher de Leon (top) and Laida Lim-Perez and Tsing Tsong Tsai (above) in original (left) and enhanced (right) panels from the 1976 movie.

Some of those who attended a recent preview of the restored version of Eddie Romero’s “Ganito Kami Noon, Paano Kayo Ngayon?” had not been born when the film was released in 1976.

But the young viewers were just as moved by the film’s “narrative wit and cultural significance” as the older cineastes, said Leo Katigbak, head of ABS-CBN Archives.

“Ganito Kami Noon, Paano Kayo Ngayon?” premieres on Nov. 10, 6 p.m., at Trinoma, as the opening film of Cinema One Originals Festival. The fest runs until Nov. 19 at Trinoma, Robinsons Galleria and Glorietta.

For a “period epic” set during the Philippine revolution of 1898, “Ganito Kami Noon” is curiously far from dated—making the digital restoration efforts of ABS-CBN Archives and Central Digital Lab all the more significant.

“Made a few years after martial law was declared in 1972, it could very well serve as an allegory of that time,” Katigbak explained. “But it also addresses a contemporary concern on the question of national identity.”

Then as now, the film “allows viewers to reflect and ponder … there is so much to be proud of as Filipinos, but we can’t perceive a sense [of nationalism] nowadays,” he said.

The movie should be seen by today’s generation precisely because its message is timeless, Katigbak pointed out. “The issues it tackles are as valid today as they were in the 1970s [and] at the turn of the previous century.”

The restoration project is a fitting tribute to the late writer-director who passed away last May 28.

Filmmaker Joey Romero, the national artist’s son, agreed with Katigbak: “Although set in 1898, the film’s theme and characters are very current.”

“Ganito Kami Noon,” which swept the major awards in the 1976 Metro Manila Film Festival, was declared part of the National Heritage by the United Nations Educational, Scientific and Cultural Organization, noted the younger Romero. “The master negative is stored for proper maintenance in the archives of the British Film Institute (BFI). The only print [locally] available is not in the best shape, with the opening and closing credits missing.”

Before Eddie Romero’s health deteriorated, he was working on returning a copy of the film to the country. “He wanted to order a new print from the BFI, using his personal funds,” the director’s son recalled. “His plan was to save the new print in digital form, which he meant to bequeath to the Filipino people.”

The national artist knew of the film’s restoration by ABS-CBN Archives and Central Digital Lab. “He said he was happy that his film could be seen by a new generation,” said Joey Romero, who was familiar with the team’s previous restoration projects—Ishmael Bernal’s “Himala” and Peque Gallaga’s “Oro, Plata, Mata.”

“I noticed the marked improvements on the two past movies … I was invited to sit through the color grading of ‘Ganito Kami Noon’ and was impressed by the technology available. The finished product gives the impression that it’s a new movie shot on high-definition.”

“We were fortunate that the colors of the print were still good, but it was severely damaged,” recounted Manet Dayrit, president of Central Digital Lab. “We had to remove lots of scratches. It took a team of 12 people 2,200 hours to finish ‘Ganito Kami Noon,’ while ‘Oro’ only took 1,700 hours.”

The group’s restoration efforts have been recognized by the Archiving Association of Southeast Asia, making it the culminating presentation at the Bangkok Conference last May.

According to Katigbak, the restored “Ganito Kami Noon” also served as a reminder that the movie industry is not only capable of churning out commercial blockbusters, but was once a proud producer of enduring masterpieces.

The whole point of the restoration process is to make “forgotten” classics readily available and accessible to viewers, old and young alike.

Katigbak related: “Like ‘Himala’ and ‘Oro,’ ‘Ganito Kami Noon’ will go through the pipeline as if it was a new film. It will have a premiere, a theatrical run … and will be made available on DVD, pay-per-view, cable, broadcast, iTunes … on whatever platform possible.”

Also in the works is a campus tour.

“We want to expose more young people to the classics,” Katigbak said. “Many of them are not even familiar with the master directors. We should constantly remind today’s generation of our great cinematic legacy.”