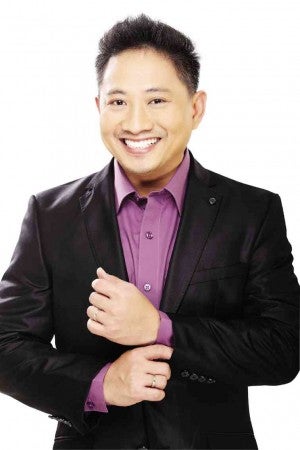 As mainstay of the gag show “Bubble Gang,” comedian Michael V has worked with some of the most desirable women in the biz—Diana Zubiri, Francine Prieto, Assunta de Rossi, Rufa Mae Quinto, Maureen Larazabal, Ara Mina…  the list goes on.

But in his 18 years in the program, never has “Bitoy”—as he’s fondly called in the industry—been tempted to fool around and jeopardize his marriage to Carol Bunagan.

Asked how he managed to avoid such temptations, Bitoy’s answer was simple and incredibly romantic: “I just look at my wife.”

The 43-year-old actor’s love life has been intrigue-free. Bitoy described Carol, a former flight attendant and his current manager, as “an ideal wife.”

“My wife doesn’t neglect herself and is always desirable! She does pole dancing, yoga,” Bitoy told reporters at a recent press con for his coming game show on TV5, “Killer Karaoke: Pinoy Naman.”

Bitoy, whose real name is Beethoven Bunagan, will host the local version of the American game show “Killer Karaoke,” where contestants perform a song while hurdling various challenges and obstacles.

Accepting the project was somewhat of a return to roots for Bitoy, who was part of ABC 5’s “Tropang Trumpo” before transferring to GMA 7.

Despite the many offers from different networks, Bitoy has avoided signing exclusive contracts, which he said would constrict his creativity. Aside from “Killer Karaoke,” Bitoy has three ongoing shows on GMA 7: “Pepito Manaloto,” “Bubble Gang” and “Eat Bulaga!”

Bitoy said he wouldn’t sign up just for the sake of stability. He explained: “I don’t want to be forced to do projects that I don’t like, shows that are rushed. I’d like to make it without a network backing me up. I believe in my skills; that’s my principle.”

As an artist, his top priority would always be entertainment and production value. “In the end, ang audience dapat ang panalo.”