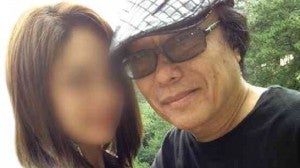 THE SENIOR citizen describes his underaged girlfriend as a “simple girl who appreciates small gifts.”

Sixty-year-old music icon Freddie Aguilar is determined to do whatever it takes to be able to marry his 16-year-old girlfriend at the soonest possible time even if it would mean converting to Islam.

Aguilar said his fans and “big names” in the Muslim community had been supportive of his controversial May-December affair with a minor. Some of the Muslims even suggested that they should have an Islamic wedding, he added.

Although he was not completely sold on the idea, Aguilar said he was considering changing his religion as an option.  (According to Aguilar, he’s a “Born Again Catholic.”)

“But, of course, we have to know first the legalities, the rules and regulations. If we can comply with the rules, then why not? Otherwise, we’ll explore other options,” he said. “I will find ways.”

His girlfriend, he said, was open to converting to Islam. “I’ve also talked to her family. And they told me if that was what it would take to resolve the issue, they would consider it.”

Aguilar said his girlfriend’s parents had already given their consent to their marriage. “The family has only one request; they want the wedding in their hometown in Oriental Mindoro,” he said.

With his girlfriend turning 17 on Nov. 29, does Aguilar have any plans on how they will celebrate? “I asked what she wanted to do on her birthday and she told me it was still far off… Now we’re thinking we wouldn’t have to wait much longer [until the girl turns 18]. I hope we have already found a solution [to our getting married] by then,” he said.

But first he must sort out a legal hitch: Aguilar said the documents pertaining to his divorce from ex-wife Antonette Martinez had gone missing.

“We’ve moved houses several times and I couldn’t find the papers. I’ve consulted a personal friend, who is a judge, and other friends who know the law. They told me that the loss of the documents could be a problem. It would also take a lot of work to (sort things out),” he told the Inquirer in an exclusive interview. “It could be complicated.”

Martinez was only 17 when she became the singer-songwriter’s girlfriend in the late 1990s. Aguilar said Martinez was 19 when they got married in Las Vegas, United States, in 2000. They divorced five years later.

“She’s happy with her new family now. I don’t want to bother her anymore,” he said.

Before Martinez, Aguilar was married for around 22 years to Josephine Ponce Queipo, with whom he has six children. They married and divorced in London, United Kingdom, he said.

Aguilar revealed that, before Queipo, he was married to Marilyn Angelo. But it was void from the start because the priest who officiated at their wedding in Olongapo City, Zambales, did not have a license.

“Our supposed marriage is not in the official records of Olongapo. A lawyer told me that this suggested that the marriage didn’t actually take place,” Aguilar said.

He added that his ex-wives were supportive of his current relationship. “It’s because they know I’m not what people think I am. Kilala nila ako,” he said.

On Oct. 28, the Inquirer reported that the family of Aguilar’s girlfriend belonged to the “poorest of the poor” in Oriental Mindoro, as evaluated by the Department of Social Welfare and Development (DSWD).

The agency said the family had been a recipient of the government’s poverty alleviation Pantawid Pamilyang Pilipino Program since 2008.

In comments posted on Inquirer.net, many netizens expressed the view that the girl was only after the musician’s money and fame.

But Aguilar dismissed the allegations. “[The accusations] are not true.” He said his girlfriend started working at a young age to prove to her family she could help them and stand on her own feet.

“She worked as a promo girl for a telecom company and also did part-time modeling for photographers. People focus so much on their poverty that they don’t see their perseverance,” he pointed out.

In earlier reports, Malacañang said it supported the DSWD’s initiative to “reach out” to Aguilar, his girlfriend and her family to offer them counseling. A lawyer identified as Fernando Perito denounced the acclaimed folk singer’s love affair with a minor, charging Aguilar with qualified seduction at the Quezon City Prosecutor’s Office.

Aguilar responded to all this by asking, “Are we really that important? Ang dami diyang mga biktima ng lindol at baha… Nagkalat ang rugby boys. Are we the No. 1 problem?”

Aguilar described his girlfriend as “a simple girl.” “She’s not high-maintenance like some of the girls I’ve dated. She’s appreciative of the littlest things and gestures. (Even) a modest T-shirt and a pair of shorts (made her) very happy. Other women would have demanded something expensive,” Aguilar said.

The 44-year age gap was not much of an issue in their relationship, Aguilar said. “She’s learning and I’m adjusting. We make each other laugh.” But like any other couple, he admitted that they had their differences occasionally.

“But that’s normal; it just means we’re going to the next level.”

They call each other “babe”—with an “h,” Aguilar added, laughing. “That’s what she wants.” He added that age was just a number. “I don’t feel it, I don’t live it… I (am only reminded of my age) when I see friends losing their hair and teeth,” he said.

His girlfriend, who only finished high school, was now thinking of taking up Hotel and Restaurant Management in college, he said. But the girl’s biggest dream is to win in a beauty pageant.

“I tell her that contests aren’t all about looks or the way you walk; it’s also about the way you think and speak. I try to teach her, especially since she has trouble pronouncing ‘f’ and ‘p.’ Kapag nakita ko na carry na niya [being in a pageant], eh ’di sige,” he said.

In the wake of the controversy, Aguilar said he thought it a good idea for the girl to go home to Mindoro in the meantime. He said the girl was fetched by her mother and younger brother, who both stayed in the singer’s house for two days, from Oct. 28 to 29.

Aguilar said it was love at first sight for him when he saw the girl during an election campaign appearance in Naujan, Oriental Mindoro, early this year. He held a minishow in the town for his friend Vice Mayor Joel Teves.

The singer of the 1970s worldwide hit “Anak” said he handed his calling card to the girl after their picture was taken.

“She was a member of one of the youth groups supporting the candidate… She was fully made up; I thought she was already well in her 20s.”

Asked why he was attractive to much younger women, Aguilar said mature men like him knew how to treat women right. “We open doors for them. We offer our seats to them. Ang unang sandok ng pagkain ay sa kanila, hindi para sa’min. We make them feel very, very important,” he explained, adding that his ex-wife Martinez fell in love with another man who was only about five years younger than him.

Aguilar also belied the popular belief that musicians were Lotharios on the prowl. He said he was a “one-woman-at-a-time man” and added, “I don’t tell a woman, ‘I love you,’ unless I really mean it.”

Despite the snide remarks he had been getting, Aguilar said he did not regret making their relationship public during the 5th PMPC Star Awards for Music, where he received a lifetime achievement award.

Aguilar said, “I was simply asked [by the press]. I would have regretted it if I lied about my girlfriend’s age and other people found out the truth. My God! Why would I regret telling the truth?”

The singer remained unfazed by claims that his controversial relationship was tarnishing the legacy he built through the years. To those who mocked him and called him a “pedophile or cradle snatcher,” he said, “Only God can hurt and degrade me. No human can degrade Freddie Aguilar! Who are these people? We are all sinners! Hello?”

Asked where his current relationship was headed, Aguilar said, at his age, he hoped the girl would be the last woman in his life. “I’m 60, but I plan to reach 150,” he said, laughing.

And just how far was he willing to go to fight for the relationship? “Kahit magkapitpitan pa ng y_ _ _ _ _s!” Aguilar said, only half-joking.