De Niro is ‘violently’ vital in ‘The Family’ | Inquirer Entertainment

De Niro is ‘violently’ vital in ‘The Family’ 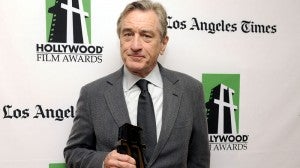 Robert De Niro may already be a septuagenarian, but he’s still in top character actor-comedian form in his latest starrer, Luc Besson’s “The Family,” in which he plays the irascible head of a most unusual family that’s attempting to start a new life in France, under the auspices of the United States’ Witness Protection Program.

After living a violent life of crime, he’s snitched on his bosses and is being hunted down by many hired guns, so he and his nuclear family have to be really good at blending into their new environment, so they don’t blow their cover.

Trouble is, violence has become a part of their daily existence for so long that they have a hard time playing it cool and legal, as some of their new acquaintances in their tiny French village find out—to their pained dismay!

De Niro, his wife (Michelle Pfeiffer) and their kids (Dianna Agron and John D’Leo) behave nicely and sensibly most of the time—but, when people in a small grocery act nastily toward her, Pfeiffer’s character “snaps,” and she blows up the entire store without batting a pretty eyelash!

For her part, her lovely daughter pretends to be helpless and clueless when a gang of sex-starved teen bullies hit on her—but, when their guard is down, she beats the gang leader up with a tennis racket—so badly, that it breaks in half!

These occasional explosions of righteous violence give their FBI handler (Tommy Lee Jones) a lot of headaches, but he’s unable to make his “explosive” wards toe the line.

The last straw is when he discovers that De Niro’s character is secretly writing his literally bloody memoirs, detailing all of the people he’s maimed and killed in the course of his criminal career. If the book gets published, he and his family will be mowed down by the hired guns hunting all over the world for them, so their collective goose will definitely be cooked!

De Niro’s character understands that, but there’s something about his new “profession” as a writer that has opened up some hitherto unexpressed emotions that are now positively screaming to be shared with the whole world—!

This unusual and occasionally even contradictory take on a criminal’s mind and heart is difficult to portray, but De Niro is such a fine actor that he achieves the improbable feat—without skipping a beat!

Pfeiffer and the young actors who play her and De Niro’s teen children are impressive in their own right, because they don’t resign themselves to just playing support to the iconic actor, but give as well as they take.

Everyone is in tip-top form in this production, so even if the film’s middle sags with that long “writing” detour and conceit, “The Family” remains an irascible viewing treat—every bloody step of the way!