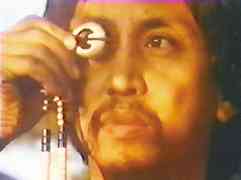 BAGUIO CITY—Filipino indie movie pioneer Kidlat Tahimik’s film about the first man to circumnavigate the world had its world premiere in Singapore last week, 33 years after he started it.

“Memories of Overdevelopment,” Tahimik’s grand opus which he started filming in 1980, was shown to a select crowd at the Singapore Art Museum during the opening weekend of the Singapore Biennale 2013.

The film is the fictionalized story of Enrique de Malacca, imagined by Tahimik as an Ifugao boy who flew, rather paraglided using his Ifugao handwoven blanket, from the Cordillera region to the province of Cebu.

From Cebu, Tahimik’s story had the boy brought to Malacca and sold to Portuguese explorer Ferdinand Magellan.

Although the story is fiction, Tahimik said he based his character on the chronicles of Pigafetta, who noted that Enrique was not able to speak the language of the first Philippine island they landed in but knew the language of what is now Cebu.

The indie filmmaker said Enrique was the first man to circumnavigate the world. Magellan completed only 99 percent of his voyage because he died in Mactan and did not finish the last 800 kilometers that would have brought him to Malacca in Malaysia.

Tahimik also said that in Magellan’s will, preserved in Sevilla, Spain, he declared that on his death, Enrique should be a free man. The explorer also left his former slave some money.

The wonder of Tahimik’s storytelling and video editing stretched his 30-minute footage into an almost two-hour film with all his trademark humor and “homemovie-ness.”

When he started the film in 1980, Tahimik cast a German gardener, George Steinberg, in the role of Magellan. Following the death of Steinberg, Tahimik’s artist son, Kawayan Thor de Guia, took on the role.

Tahimik himself played the role of Enrique in 1980, when he was only about 38 years old. As the story runs to the present, Enrique will look a lot different as Tahimik is now 71 years old.

How Kawayan interacted with his 71-year-old father as Enrique is another reason why this film is a must-see for Filipino indie fanatics.

Tahimik restarted filming only this year and came out with a “collage of new images without a thousand violins as soundtrack.”

The film carries Tahimik’s messages of anticolonialism, erosion of cultural values, “indio-genius” and the return to one’s roots. It is also his paean to his three sons and 96-year-old mother, former Baguio Mayor Virginia de Guia, who graced the premiere in Singapore.

The premiere is part of the Axis Art Project of the Cordillera, one of the collaborative projects from Southeast Asia on exhibit until February 2014.

“It still is a home movie, as all my movies are essentially home movies,” Tahimik said.

The Philippine art community will be amused to see in the film anthropologist and writer Dave Baradas as Lapu-Lapu, photographer Wig Tysmans as chronicler Antonio Pigafetta, Tahimik’s wife Katrin as Princess Isabellita and Laida Lim Perez as the Chinese merchant who sold Enrique.

Boy Yñiguez shot the first version. Ten other videographers are involved in the latest version.

In the film, the young Enrique returned to Ifugao province after his around-the-world voyage. Master and slave meet again in 2013 in the village of Hapao, a picturesque village with rice terraces, in Hungduan town in Ifugao.

Like all Tahimik’s films, “Memories of Overdevelopment” is not the typical blockbuster movie that a viewer would easily fall in love with after watching, but forget the next day.