The musician, songwriter, producer who has worked with music’s who’s who | Inquirer Entertainment
Close
menu
search

The musician, songwriter, producer who has worked with music’s who’s who 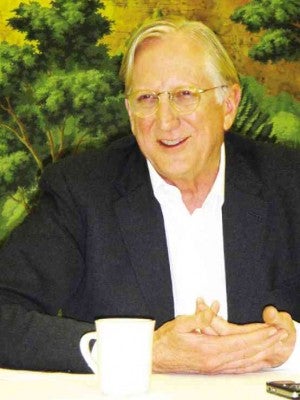 LOS ANGELES—As an award-winning musician, songwriter and producer, T Bone Burnett has worked with the who’s who in music’s various genres— from Bob Dylan, Elton John, Tony Bennett, Robert Plant, Justin Timberlake to Marcus Mumford. T Bone is an accomplished film scorer and music producer as well, his latest triumph being the soundtrack of the Coen brothers’ absorbing new film, “Inside Llewyn Davis.”

He also produced a terrific concert staged recently at New York’s Town Hall in connection with the film, “Another Day, Another Time: Celebrating the Music of ‘Inside Llewyn Davis,’” which featured a wide array of artists, from Joan Baez to Marcus. We chatted with T Bone the morning after the concert, which will be aired on Showtime.

Not bad at all for T Bone, whose big break came when he played guitar in Bob Dylan’s legendary Rolling Thunder Revue in 1975. “What did Dylan take from me?” T Bone repeated aloud a question in a recent interview at New York’s The London Hotel. “Nothing, I think. I took almost everything from Dylan, I have to say.”

From that gig with Dylan, T Bone worked his way up, racking up Grammy (he won 12), Oscar and Golden Globe awards and various other prizes in the process. He has collaborated with Roy Orbison, John Mellencamp, Elvis Costello, Diana Krall, Natalie Merchant, k.d. lang and many more.

A towering presence at 6’4” tall, T Bone was genial, charming and not unlike an absent-minded professor—he occasionally paused to ask midway in his answers what he was discussing. On his unusual first name, he quipped, “I got it when I was a kid. Really, when I was 5 years old. I’ve made up so many stories (about how I got the nickname) over the years just because there’s no good story.”

As the music producer of “Inside Llewyn Davis,” T Bone played a crucial role in the film about a folk singer, the title character played convincingly by Oscar Isaac, who struggles to make it in 1960s-era Greenwich Village (New York) scene. Llewyn often has to crash on other people’s couches.

Asked if he’s had his share of sleeping on other people’s sofas when he was just starting in his career, T Bone laughed and said, “I crashed on (singer-songwriter-visual artist) Bob Neuwirth’s sofa plenty (of times). I crashed on Larry Poons’ sofa. Larry was there last night. He is the last of the great abstract expressionist painters. Larry is still making great paintings. When I was a ‘kid,’ I was living out in Los Angeles, sleeping on a really nice couch in Coldwater Canyon. Burt Bacharach, my idol, lived next door. Charlton Heston lived at the top of the hill.”

Sleeping on that couch led to a very nice gig. “Bob was doing a gig here (in New York) at the Bitter End or I think it was called The Other End,” he recounted. “Bob called me up and he said, ‘Hey, man, Dylan and I are putting together a show. We’re going to take it all around and play in small theaters. You ought to come up and be in the band.’ He invited me to be in the band. I said, ‘I don’t have any money.’ I didn’t because I was just a freelance poet at that time.

“Bob said, ‘I’ll get you a ticket.’ So, Larry Poons bought me a ticket. I flew up here. Bob put me on his couch. That’s when we all put together the Rolling Thunder Revue.”

One of the delights of the “Llewyn …” soundtrack is a quirky, funny song, “Please Please, Mr. Kennedy,” that T Bone composed with Justin Timberlake (who plays a folk singer), Joel and Ethan Coen.

“It was based on a song from the 1960s that was about the Vietnam War,” T Bone said. “But we didn’t want to write a song about the Vietnam War. We wanted to write a song about space travel because we wanted to create the John Glenn Singers (Justin, Oscar and Adam Driver). (Astronaut) John would be going into outer space but he would have second thoughts, let’s put it that way, just before blast off. I think that got to the point of madness that we wanted to do it in the film.

“That song started when Justin and I went to buy a guitar for him at Norman’s Rare Guitars over in the (San Fernando) Valley (California). Justin just started playing this piece like a The Coasters song and singing, ‘Please, Mr. Kennedy, I don’t want to go.’ It was silly and we wanted it to be beyond silly. Then I wrote the lyrics for it. I was trying to be Ogden Nash. Then I gave it to Ethan and then Joel and Ethan finished off the lyrics. Justin and I wrote the melody. It was an honest-to-God, four-way collaboration.”

A revelation in the film is Oscar Isaac, who sings and plays the guitar. “I spent many years in the ’60s and ’70s and even some of the ’80s sitting around living rooms and small coffee houses with people playing acoustic guitars and singing,” T Bone said. “Some of those people were very good, like riveting. So I knew what the standard was. I had sat around in rooms a lot smaller than this with Bob Dylan and Patti Smith. We had played and sung songs and thrown things back and forth so I knew who was good.

“I saw this tape of Oscar and I thought, wait, he was actually good. So he came in, he played and he did it. He did the same thing that Don Everly (T Bone produced the Everly Brothers’ ‘Gone, Gone, Gone’ single) did … I saw Don do it sitting as far as we are. Oscar played ‘So Sad (To Watch Good Love Go Bad),’ in a living room. It broke my heart. Everybody started crying. That was what Oscar did. He just came in and broke your heart. That’s what that’s supposed to be. These ‘bad’ musician people—that’s what they do—they go around and break people’s hearts.”

In the New York concert, Rhiannon Giddens stunned the crowd and almost stole the thunder from the formidable lineup of musicians. “Rhiannon is currently our most profound music artist,” T Bone gushed about the singer who deserves to be a major artist. “She’s come to this in the most beautiful way. Though she’s an archaeologist, she’s a great singer. She’s a trained singer, a soul singer and she’s got ‘feel,’ she’s got everything.

Of Marcus, who was in the cast along with his wife in real life, Carey Mulligan, T Bone said, “He has this beautiful, deep, convincing real tone. That’s what I always look for because we’re storytellers. I think Marcus is a great storyteller. If you have a message, he’s a great person to deliver the message. I think the same of Oscar. He did the same thing. Marcus was part of the process with us so when we started, he came in. The first thing we recorded was ‘Fare Thee Well,’ which was sort of the beginning of the film after Oscar’s performance. He put on a record and it was a record of him and Marcus doing ‘Fare Thee Well.’”

The man who metamorphosed from a financially broke kid sleeping on couches into a music legend was doing his best to give back. For one, he made sure to spotlight emerging young artists in that NY concert. He said, “In the embattled world of music right now, so much of my time is spent holding the door open for the people that are coming after me like these kids last night. I’m lucky I can still work. A lot of people can’t work. They’re trying not to pay people anymore. It’s tough out there so I’m lucky. Those kids who were on that stage last night— they needed to be heard so anything I could do (to help them I would do) …”

E-mail the columnist at rvnepales_5585