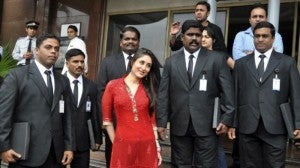 Indian Bollywood actress Kareena Kapoor poses with celebrity bodyguards during the promotion of her new Hindi film 'Bodyguards' in Mumbai. They are an essential part of any Bollywood star's entourage, silently shadowing their every move and keeping over-eager fans and a celebrity-obsessed media at a muscular arm's length. AFP PHOTO

MUMBAI—They are an essential part of any Bollywood star’s entourage, silently shadowing their every move and keeping over-eager fans and a celebrity-obsessed media at a muscular arm’s length.

Now several of the increasing number of bodyguards working for A-list Hindi-language film stars have stepped into the limelight to speak about their duties, as a new movie on the subject is released.

The focus of attention has been a well-built Sikh nicknamed Shera (Tiger), who has been at action hero Salman Khan’s side for the last 15 years and is accompanying him on promotional tours for Khan’s new movie “Bodyguard”.

“If anyone fires a bullet at him, I will stand in front of it and sacrifice my life for him. I love him to that extent,” broad-shouldered Shera, who is in his early 40s, told reporters this week.

“In the last 15 years, Salman-bhai has done so much for me,” he added. “Bhai” is Hindi for “brother” and is often used between close friends.

The feeling is reciprocated by Khan, who plays a bodyguard for Kareena Kapoor in the movie, a remake of the 2010 Malayalam-language film of the same name.

Shera — real name Gurmeet Singh Jolly — has been with Khan through the best of times and the worst of times, including a drink-driving case in 2002 and when Khan was jailed for a week in 2006 for killing endangered animals.

In a sign of his loyalty, Khan opted to use the badge and uniform of Shera’s own firm, Tiger Security, in the film despite lucrative offers from a number of leading private security companies.

“I trust Shera completely with everything in my life, be it my money or even my women,” joked the 45-year-old actor recently.

“If he ever decides to write a biography on me, I’m finished. He is the man whom I fear the most because he knows everything about me.”

Bollywood stars inspire a fanatical following in India, making security staff as much of a requirement as an agent or a personal stylist.

While most fans are well-behaved, Kashinath Karmatkar, who works for megastar Amitabh Bachchan, said some can overstep the mark.

“Many times fans go crazy when they see stars face-to-face and they try to approach them closely,” he said at a publicity event for “Bodyguard”.

“It’s at that time we have to be very careful to prevent them from coming close to the actor and at the same time see that the fans don’t get hurt by our behavior.”

Hearthrob actor John Abraham has said he is rarely mobbed in Mumbai and is left to get on with his daily routine. But it is a different story elsewhere in India.

“I once walked into a Jaipur ATM and couldn’t come out,” he wrote on his web site last year.

“By the time I had finished, there was a very committed Rajput ATM guard, who was trying to protect me from a very noisy mob of followers.”

Female fans have pinched and even scratched him on other occasions, he has said.

Bachchan, star of some of the biggest hits of the 1970s, has long used bodyguards, who work so closely with actors that they often feel part of the family.

“The Big B” still has a huge following, with hordes of fans regularly camping outside his north Mumbai home just to catch a glimpse of him.

But the trend only really took off in the 1990s, when underworld figures tried to establish a stranglehold on the industry, and actors, producers and directors frequently received threats.

Bollywood’s unarmed bodyguards now largely work at crowd control, with the bonus of accompanying stars at home and abroad.

For men like Yuvraj Ghorpade, who left school with few qualifications at age 16, the job has provided him with undreamed-of opportunities.

“The future was dark for me as I was doing odd jobs for survival until I decided to join Ace Security nine years ago,” said Ghorpade, who has been a keen bodybuilder since his teens and is now in his 30s.

“Today, I am the bodyguard for (the actor-producer-director) Aamir Khan and many of my friends are envious of the fact that I roam with such a big celebrity all the time.”