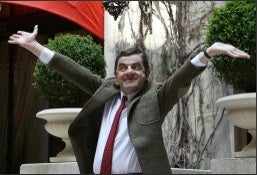 MANILA, Philippines—The Movie and Television Review and Classification Board called Tuesday the attention of a television network after it aired on daytime a show that exposed the main character’s behind.

MTRCB chairman Eugenio “Toto” Villareal said in an interview with Radyo Inquirer 990 AM that they were “shocked” as the board’s monitoring and inspection unit saw a nude Mr. Bean running in a corridor in its Monday morning episode that was shown on ABS-CBN.

What alarmed the MTRCB was the situation comedy “Mr. Bean” starring British actor Rowan Atkinson, was aired in the daytime.

“We were shocked by the scene where Mr. Bean came running through a corridor only using a signage [board] to cover his private parts. Few minutes later, he exposed his behind,” he said.

Villareal said the butt exposure stayed “quite long” on air.

“We have always reminded the networks that the television hours 6 a.m  to 9 p.m. are safe harbor periods for child viewers,” he explained.

According to the United States’ Federal Communications Commission (FCC), safe harbor refers to the hours during which television stations may not transmit material deemed indecent for children.

Villareal said they have communicated with the television network.

The MTRCB arranged the mandatory conference with ABS-CBN on November 5, it said over Twitter.