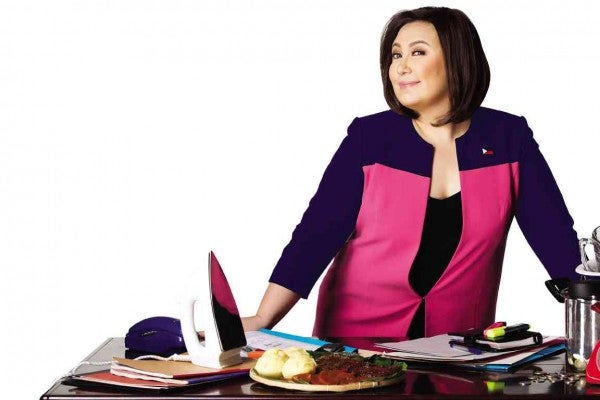 “Madam Chairman,” Sharon Cuneta’s first sitcom, made a feisty impression on its debut telecast last Monday, Oct. 14, with its easy-breezy storytelling and antic characters and situations.

Sharon looked and felt right at home in her portrayal of a barangay kagawad who literally cooks up a smorgasbord of food and fun, but soon needs to face up to two unexpected problems: her having to replace her locality’s old and corrupt barangay chair when he kicks the bucket, and her husband’s newly exposed philandering ways!

Being a feisty woman with a heart and girth as big as all creation, the new chair may make a few mistakes along the way, but we can bet that she’ll eventually turn out to be completely up to the tasks at hand.

Unlike many other local series that take their sweet time setting up their main story and conflict by way of circuitous and belabored “generational roots” allusions and back stories, “Madam Chairman” sets its action in the here and now, and events proceed in brisk, street-smart fashion, enthusiastically pulling us along with them.

Thus, at the end of the first telecast, the show had already established most of its principal plot premises, with Sharon’s warmly feisty character providing the strong fulcrum for those key premises and their development.

It looks like Madam Chairman’s personal problems will provide the series with its “juice,” with Sharon having to contend not just with her wayward husband, but also with a teenage daughter whose pasosyal airs turn everybody off.

Aside from these personal tests and tempests, however, the new chair will have to deal with all sorts of sticky situations and icky individuals as her barangay’s official leader. Since the just-deceased chair was notorious for his corrupt ways, Sharon’s character has a lot of cleaning up to do, and she will definitely have to butt heads to implement the reforms that her locality needs to clean up its act.

Thus, the new show can have a “bonus” value to viewers that goes beyond mere diversion and entertainment: It can expose the chronic problems and conflicts that are rife in some of the country’s many barangays, so that viewers can learn how to spot them in their own localities.

If the new sitcom teaches them how to pinpoint and expose the basic governance-related ills and malpractices around them, it will perform a much-needed public service—without losing its ability to entertain. That would make it a should-see show for everyone!

Will it, in fact, do that? Subsequent telecasts will answer that question, and we hope the production’s response will be in the enthusiastic affirmative.

If “Madam Chairman” lives up to its early promise, it could upstage the bigger and more turgidly melodramatic teleseryes it’s competing with, showing viewers that they have other, less predictable and escapist options to enhance their viewing days—and nights.

Since there’s always room for improvement, we should further note that the series’ young players turn in generally knee-jerk performances, and some of the mature cast members who portray villains and irritants clutter up the scenes they’re in with their over-the-top and excessively attention-calling portrayals.

Thus, some editing and additional focus are definitely in order. If these and other improvements are effected, “Madam Chairman” can be even better that it already is, and Sharon’s stellar appeal will be energized and further enhanced.