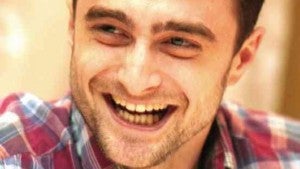 RADCLIFFE. “I have to forge my own path.” RUBEN V. NEPALES

LOS ANGELES—After appearing nude before live audiences night after night in “Equus” on Broadway and in the West End, Daniel Radcliffe is unfazed shooting naked and intimate scenes, even a gay sex one in his new film, “Kill Your Darlings.”

“I’ve done a few nude scenes and a couple of sex scenes now,” Daniel said in our interview with him in Toronto. That includes his make-out scene with Dane DeHaan (who debuted in John Sayles’ Bohol-shot “Amigo”) in “Kill Your Darlings.”

“To be honest, doing any kind of nude or sex scene on film is definitely not as nerve-wracking or intimidating as doing it onstage,” stressed the “Harry Potter” star. “I set myself up for a very easy time of it after doing ‘Equus’ when I was 17. Scenes like that since then aren’t as ‘challenging.’”

“We shot it so fast,” Daniel said of his scene with Dane, which involves a kiss. “We only had an hour to shoot the whole scene. Because the whole film was shot so quickly, there wasn’t any time to get nervous or worried. You just go for it! In both that scene and the sex scene I had in the movie, ‘Horns,’ with Juno Temple, most of the time off-camera was spent laughing. It was not particularly stressful. It was funnier more than anything else.”

Daniel, who continues to grow as an actor, does not worry about how some of his “Potter” fans might react to his gay sex scenes in “Kill…”

“Not really, because Allen Ginsberg isn’t their hero, is he?” he said. “I don’t think I could move forward if my career decisions were based on what other people might think of my choices. I have to forge my own path. I did ‘Equus,’ and ‘Harry Potter’ fans have followed me through that and many other projects. The ‘Potter’ fan base is an incredibly smart one. They like challenging material. They grew up with me. If they coped with ‘Equus,’ they can definitely cope with this!”

Daniel is coping very well with his post-“Potter” life. The multimillionaire said he only splurges on books. “I don’t go around spending my money all over the place,” said the actor who is quick to smile and laugh. “I’m slightly compulsive when I go into book shops. I will come out with a huge stack of books. Other than that, it’s really limited. I work all the time.”

Daniel added, “If you want to talk about luxury that comes with money, it’s the room to pick any script you want and not have to work on something you didn’t want to do. I have conversations with friends who are like, ‘Man, this is the most awful script I’ve ever seen in my life, and I have to do it because I’m getting paid.’ I don’t have to do that. If you want to talk about something valuable that money gets you, it’s that.”

Clothes-wise, Daniel said he turns to someone for guidance. He said, “I have a stylist called Sam Spector, who’s wonderful. I’m getting better at dressing myself and taking more of an active interest in not looking like I just rolled out of bed. Sam just makes me look sharp and doesn’t dress me in things that I feel silly in.”

On the possibility of starring in another stage musical, Daniel shared, “ If there’s one thing that I know now after having done ‘How To Succeed…,’ it’s that I couldn’t have done it had I not been as passionate about it as I was. It’s a huge time commitment. Having worked onstage, on film and in TV, I can say that the hardest work an actor can do is a musical. I want to do it again, but maybe not in a couple more years.”