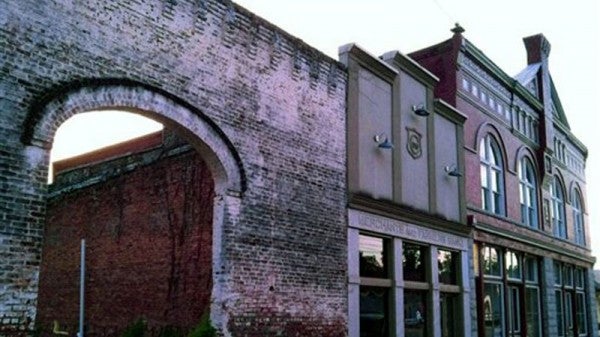 This Oct. 1, 2013 photo shows the archways and brick wall of an old building in Grantville, Ga., that is used to film a scene in the AMC TV drama “The Walking Dead.” Tourists come to the west Georgia town to see the wall and other nearby buildings where scenes from the show were filmed. AP

GRANTVILLE, Georgia — When the cotton mill closed, the rural Georgia town of Grantville began a slow transformation into a ghost town.

Over the decades, time turned the remains of the town into something almost post-apocalyptic, the perfect modern-day set for humans and “walkers” to attack one another. That’s how the hugely popular TV show “The Walking Dead” ended up coming to town and bringing new life to Grantville.

Several key scenes in one episode from the AMC series were filmed on and near a one-block stretch of antique buildings on Grantville’s Main Street.

The series’ fourth season premieres on Oct. 13. Crews have been filming the new episodes in Georgia, but they keep locations of future episodes closely guarded secrets until the shows air.

In Grantville, the town’s ruins were featured prominently last season. Bodies of walkers slain on the show were buried in a vacant lot beneath the brick archway remaining from a cotton mill building. Gunshots were fired from a nearby rooftop.

And actor Chandler Riggs, who plays a boy on the show, entertained himself between scenes by placing pennies on the railroad tracks, the coins soon smashed into souvenirs by passing freight trains.

Now, every Saturday, visitors from around the country and the world turn off Interstate 85 and onto a two-lane highway that leads to the tiny town 49 miles (79 kilometers) southwest of Atlanta.

Since last summer, more than 3,600 visitors have taken a free tour led by Grantville Mayor Jim Sells, who explains where each scene from the “Clear” episode — during which the character Morgan makes it his mission to “clear” walkers by killing them — was filmed.

Visitors have come from as far as Australia, Singapore and Brazil, giving new life to the town through tourism, Sells said. He calls it phenomenal, but adds: “We don’t understand it.”

“Nobody came after they filmed ‘Lawless’ and ‘Broken Bridges’ here,” he said, referring to movies shot in the town.

“But once this episode aired from The Walking Dead, people started showing up from all over.”

The cotton textile industry once fueled the economy of Grantville and the other towns in Coweta County, where a stretch of Interstate 85 is named the Alan Jackson Highway, for the country singer who grew up in nearby Newnan and wrote the 1993 hit song about the Chattahoochee River.

Grantville eventually became known by residents in the area as “the liquor exit” — it’s the only place in Coweta County to buy bottled liquor. But Sells said that “when textiles left, this town died.”

Then came the film crews.

Grantville is among a handful of rural Georgia towns undergoing a renaissance, thanks to the AMC show.

In nearby Senoia, many scenes are filmed in the historic downtown area, transforming into the fictional town of Woodbury for the show.

In Haralson, tours are offered each weekend for fans to enter the barn that was the scene of an ambush. They can hold an M16 out the same window as one “Walking Dead” actor did.

Other tours are offered in Atlanta, where a memorable scene from the show’s first season was filmed atop the roof of the old Norfolk Southern headquarters on the southern edge of downtown. Another key scene — a massive battle involving dozens of walkers and a military tank — took place in the Fairlie-Poplar Historic District.

On a recent Saturday in Grantville, visitors gathered at Station 22 Grill, as groups do every Saturday, to watch the “Clear” episode, the 12th in the show’s third season. Production crews blocked off Main Street for 15 days for filming.

Many townspeople know the dialogue by heart. A dishwasher behind the bar mouths the words: “You said that you would turn on your radio every day at dawn. … And you were not there!”

When the episode ends, more than 50 people gather around Sells. He leads them around town and then inside a second-story apartment, the hideout used by one of the characters in the show. The walls are covered with chalk-drawn rantings as they were during filming. The small-animal cages, used to hold rabbits and other bait for walkers, and a couple of rifles are there, too.

Sells said “The Walking Dead” and other filming have revived interest and optimism for Grantville’s future. He recalled how last month, actor Jim Carrey signed autographs and posed for pictures in Grantville after filming scenes for “Dumb and Dumber To.”

Now, Sells hopes “The Walking Dead” draws enough attention and visitors to Grantville that perhaps new businesses will locate there.

“We could use a grocery store, a drug store, a daycare,” the mayor said.