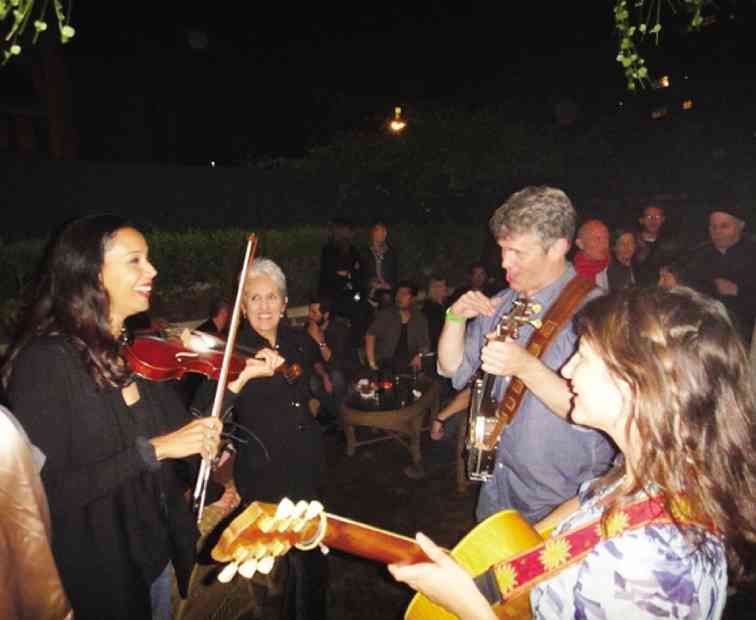 LOS ANGELES – Just when we thought it couldn’t get better than watching Joan Baez, Patti Smith, Elvis Costello and current and emerging musical talents jam together on stage in “Another Day, Another Time: Celebrating the Music of ‘Inside Llewyn Davis’” at The Town Hall in New York, it actually did.

After the concert, one of the best we’ve seen in a long time, we witnessed the legendary Joan dance the night away in the after-party at The Bowery.

The queen of folk music, beautiful at 72, first started dancing the swing with a partner and then later, the jig as her fellow musicians began jamming.

But back to the show itself, which starred the artists featured in the soundtrack of the Coen brothers’ lovely, inspired “Inside Llewyn Davis,” plus more, as picked by T Bone Burnett, who is the film’s executive music producer.

The movie succeeds largely because of Oscar Isaac’s portrayal of a struggling musician. Who knew that the actor who played Joseph in “The Nativity Story,” “The Bourne Legacy” (in a short but marked role as Outcome No. 3) and the Madonna-directed “W.E.” (he was Evgeni) could sing so well?

Oscar sang the haunting “Hang Me, Oh Hang Me,” one of the songs (and our favorite) performed from start to finish in the movie—a decision made by the Coens which enhances the film.

Oscar’s other numbers in the show included “Please Please Mr. Kennedy,” a funny winner of a song which he sang in the film with Justin Timberlake (delightful as a 1960s folk singer-songwriter) and Adam Driver.

To wild cheers, Elvis Costello was jokingly introduced as an “understudy” for the absent Justin (who did cowrite the song with T Bone, the Coens, Ed Rush and George Cromarty). Costello cracked, “Heaven knows, when you think of Justin, you think of me.”

Oscar, Elvis and Adam performed the song with the talented The Punch Brothers, who served as the concert’s house band.

In another engaging number in the film, Justin, Carey Mulligan and Stark Sands—portraying a folk trio—delivered the classic “Five Hundred Miles.” Elvis, Carey, Stark, The Punch Brothers and Secret Sisters did the song in the show to be telecast later by Showtime.

The concert, emceed by John Goodman who plays a mysterious man named Roland Turner in the film, was a seemingly endless series of terrific performances. But one singer that we did not even know until last weekend’s concert, the Carolina Chocolate Drops’ Rhiannon Giddens, blew us away. Stunning in a red gown, Rhiannon awed the audience with her interpretation of a Gaelic traditional piece and “Water Boy.”

We’ll never forget this as the night that Rhiannon seared quite an impression on our mind.

Lake Street Dive, with its engaging lead singer Rachael Price, also made a good first impression on us with its jazzy number, “You Go Down Smooth.”

Patti Smith came onstage to hearty applause and took on “Babe I’m Gonna Leave You.” She also sang a classic gem, “People Have the Power,” which she cowrote with her late husband Fred “Sonic” Smith. Joan Baez, Lake Street Dive, The Avett Brothers and Dave Rawlings joined Patti for a rousing highlight.

Patti quipped about the younger musicians on stage, “I am sure that Fred would be glad to see all these people.”

Joan, of course, was the concert’s star, especially when she performed a stirring “House of the Rising Sun.”

Marcus Mumford, Carey’s husband who performs a couple of tunes in the film, said after singing “Give Me Cornbread When I’m Hungry” with Joan, “That is f—ing Joan Baez, man. Everyone has been too cool to have one of those OMG moments.” Jack White drew loud applause and cheers with his numbers, which included “We’re Going to be Friends.”

At the after-party, Rhiannon impressed us even more when she played the fiddle,  jamming with Joan and several musicians. We heard that after we left the party, Patti Smith arrived and joined the impromptu gig.

Earlier in the week, we saw how Barkhad Abdi’s acclaimed performance in Paul Greengrass’ “Captain Phillips,” based on the true story of the 2009 hijacking by Somali pirates of a US cargo ship, is winning him fans in the film community. After Barkhad joined Kent Jones, New York Film Festival’s director of programming and selection committee chair, Tom Hanks (equally effective in the title role) and Paul at the film’s festival press conference at the Walter Reade Theater in the Lincoln Center, he signed autographs from new admirers.

Barkhad and another debuting actor, Faysal Ahmed, are compelling in their portrayal of Somali pirates.

Later in the evening, at the movie’s reception at the Harvard Club in Manhattan, we bumped into Yul Vasquez, who played Padre Hidalgo in John Sayles’ Bohol-shot “Amigo.” Yul plays Captain Frank Castellano in “Captain Phillips” and Delegate Herrera in Ben Affleck and Timberlake’s “Runner Runner.”

Yul was with his wife Linda Larkin, who also has a “Filipino Connection.” She was the speaking voice of Princess Jasmine in the Disney-animated films.

E-mail the columnist at [email protected] Follow him at http://twitter.com/

Read Next
Filipinos headline 3 films nominated for Oscars
EDITORS' PICK
vivo brings to the Philippines a powerful smartphone with a slimmer body, the vivo Y02s for only PHP 6,499
Apple warns of flaw that lets hackers into iPhones, Macs
46% of schools nationwide to have full face-to-face classes on Aug. 22
House energy committee chair Arroyo bats for cheap electricity
What to watch out for when selecting a video surveillance solution
Heads may roll at BOC, says Palace if sugar smugglers are allowed to use recycled import permits
MOST READ
DepEd to give teachers P5K cash allowance within first week of classes
Dressing the dead: Indonesian villagers clean corpses in afterlife ritual
DOJ indicts bank officer in $2.1 billion Wirecard fiasco
Mayor bares issues vs closed QC school
Don't miss out on the latest news and information.