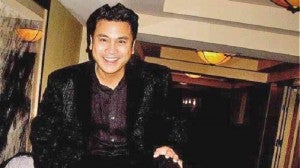 CHRISTIAN Moralde celebrates his experiences, good and bad, for which he is “really thankful.”

LOS ANGELES—Fil-Am actor Christian Moralde mines what he considers the challenges of his growing up years—being “fat and Filipino” in Arizona, diagnosed with obsessive-compulsive disorder (OCD), raised by a mother who worried excessively and a father who was “negative” toward him— into a show coming to New York this month.

“A multitude of occurrences and events can shape one’s life,” Christian said. “A lot of the baggage we [lug around as children and young adults] impact how we conduct ourselves as adults. My show focuses on that.”

The LA-based actor and host of The Fashion News Network, whose birth name is Walter Christian, explained that his show’s title “is a metaphor for changing one’s life direction by changing his or her name.”

Below are excerpts from our interview with Christian:

Growing up fat and Filipino in Arizona—why was that a challenge?

I had a very hard time integrating into the mainstream school system. I [noticed] that no one looked like me. In the ’80s, the mainstream was filled with individuals who were my polar opposites. It was the decade when Heather Locklear, Ricky Schroder and Michael J. Fox were big. I stuck out in two ways—I was fat and Filipino. Adolescence, puberty and finding yourself are hard enough. Add to these turning points being segregated for ethnicity and physical looks.

You were spat in the face several times a day in junior high. How painful an experience was that? Did you ever fight back?

To this day, I still “feel” having someone’s saliva dripping down my face. Yes, that was painful. But today, I see all that differently. In my show, I make the strong statement that I am thankful for those experiences. Today, I have a truckload of friends. I do not take any one of them for granted. I grew up without knowing true friendship. Thus, I am a better person for valuing the people in my life today. Unfortunately, I never fought back. As an obese adolescent … I saw myself losing any fight even before it began.

What was your mom like when you were growing up?

I’ve always felt that my mom has an unusual, abnormal, elevated sense of worrying. There are many examples, true to life, that I share in my show. I remember a time when my mother paged me [on my beeper] for a 911 emergency page. I was out having drinks with friends. I remember specifically trying to calm down my mom (via a public pay phone). My sister was living in a dorm at the time and my mom was trying to get a hold of her, to no avail. The last thing my mom remembered was my sister ordering a pizza to be delivered. My mom was frantic, [thinking] that my sister was abducted by the pizza delivery man.

You had a difficult time with your father, whom you thought was very negative toward you. How tough was that and what was the turning point that made you see him in a different light?

There is a pivotal scene during the climax of my show that unravels this turning point. This was based on the time I was looking at very old photographs of my father, which I had never seen. He said that, growing up, he faced many obstacles. I didn’t know that. Through that disclosure, I got a stronger glimpse of my dad as an individual affected by circumstances, versus him “just being a parent.” There is a lot of beauty in getting to know one’s parents. There are reasons and situations that shape their current mind frame. I am lucky that both my parents are still alive and able to give me glimpses of their past.

You suffered from OCD but you were not diagnosed until your later years. How did you deal with that, then and now?

In the early ’90s, any sort of mental disorder was sort of a taboo. We’re slowly coming out of that taboo thinking. Today, I hear many people casually use the acronym “OCD.” It’s like a basic adjective in the English language. This wasn’t the case back then. I’ve grown a lot in the last decade and a half. I embrace my OCD and I’m happy to help bring it to public awareness through my show.

How did you overcome those challenges to be what you are now, seemingly at peace with yourself?

Today, I look only at all the good that I’ve experienced, from traveling around the world to being part of the entertainment industry. Not a day goes by that I am not thankful for my life now. There is that famous quote [that I use in my show]: “It’s not the moments of breath one takes; it’s the moments that take one’s breath away.” It’s hard being bitter when so many moments leave me breathless.

What books, philosophy or principles keep you from being depressed when you think of your growing up years?

There isn’t a specific book or philosophy that I follow. I’ve always believed in a higher good. I’ve always been a spiritual person who has a strong belief in God. I can never really be depressed because I’ve gone through the worst and survived.

Is it more cathartic than painful to revisit all that onstage?

It’s actually both. That is such a good question because there are so many moments from my life that I relive onstage. My director, Charles St. Clair, always says the stage is an opportunity to share something with an audience that you would never whisper to a close friend. The cathartic moments occur through the process of performing and sharing my stories. When I did my first run of the show, numerous audience members shared stories of their own struggles and problems. It is cathartic to see others reflect on their lives while I also share a little bit of mine.

Which segment of your past still makes you emotional when you bring it up onstage?

I’ll have to say moments with my father. I think it’s safe to say that when I was hurting, he was, too—just in a different way.

How did your parents react when they first watched your show? Will they watch the show in New York?

They won’t make it to the New York show. But they caught the world premiere in Los Angeles and a stop that I did in Phoenix. My parents are very reserved people [who don’t say much], but I was told they were proud and pleased. I think what surprised them the most was that I was able to weave a story about our lives. They have always complimented me on my gift of writing; I think I was able to give this gift some justice through this show.

“Entertainment Today” praised your show as “a hilarious, tough, emotional journey.” How do you strike a balance between keeping the show hilarious and, at the same time, a tough, emotional look at your journey?

The balance is struck because everything is true and authentic. I take moments of my life and celebrate them with laughter, humor and sadness. I’ve always been a fan of movies that elicit laughter and tears. I believe that if one shares from the heart, the wide range of emotions just follow.

What advice can you give people, especially kids, who experience some or most of the hurdles you went through?

My grandfather’s favorite advice to me was, “To thine own self be true.” Any adolescent going through any hurdle should know who he is first. I would advise anyone, “Know yourself, love yourself, be yourself, be happy with yourself.” My biggest mistake was trying to conform. Conforming doesn’t solve problems; it covers them up.

What makes your show compelling amid the glut of shows, films, etc. about growing up and dealing with adversities?

My show is a really fun show. Aside from the aspects we discussed, there are so many other things that occur in the 90 minutes that I am onstage. It is filled with pop culture references, from the ’70s to today. I talk about everyone—from “Donny and Marie” to “Ally McBeal,” “The Mary Tyler Moore Show,” “Cheers,” “The Breakfast Club” and a slew of other pop culture references that helped shape who I am today.