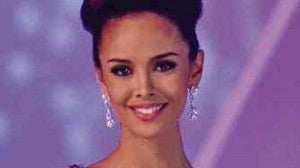 MANILA, Philippines—Don’t mess with a beauty queen from the Philippines.

Former beauty titlists and Miss World Philippines officials are rushing to the defense of Megan Young, the Filipino Miss World 2013 title winner who has come under attack from online haters.

The Facebook user said: “Miss Philippines is Miss World? What a joke? I didn’t know those maids have anything else in them. Hahaha.”

The post has since been taken down from the social networking site. Inquirer tried to reach that Facebook user, who is alleged to be based in Singapore and studied at Manchester University, for comment but has not received a reply at press time.

Soon after the racial slur went online, a hate page attacking the Facebook user was put up on Tuesday, gaining 11,068 “likes” in a matter of hours.

Scriptwriter-actress Bibeth Orteza asked on Facebook: “But is DeDiva even her real name? Is that a surname typical from that part of the world…a cowardly pseudonym…or a play on ‘diva?’”

Filipino beauty queens have come to Young’s defense against the Facebook hater and other bashers.

Gemma Cruz-Araneta, Miss International 1964, asked pointedly: “What’s wrong with being a maid? Is that a crime?”

Melanie Marquez, Miss International 1979, told the Inquirer: “To all her detractors, bless your hearts. That’s all I can say. I am proud of and grateful for Megan’s simplicity and golden heart.”

Jennifer Cortes, Binibining Pilipinas-Universe 1978, said: “Seems the Philippines has become a powerhouse (in the pageant scene). Lots of people are getting envious. Sad about the personal attacks, but we are a country of beautiful people.”

Miriam Quiambao, Miss Universe first runnerup 1999, quipped: “I have nothing to say (to those critics). Let Megan show the world how great she is as a Filipino woman. Meanwhile, let’s all do our best to uplift our country by giving nobility to our jobs…wherever we are. This is a call for everyone to step up and show the world that we are kind, God-fearing people.”

Fashion model and Miss Visayas-RP 1976 Bessie Badilla quipped: “They are just sore losers. We shouldn’t waste our time on them. Let us enjoy Megan’s victory and ignore those who do not wish to celebrate with us.”