TERI Malvar would rather focus on her studies and leave show biz to her mom. ARNOLD ALMACEN

A Grade 7 pupil from Parañaque, Teri acknowledged that La Aunor was the frontrunner in the race. “I was very surprised; I thought she would win. I saw ‘Himala’ on cable and I know how good she is. My mom has a book of the ‘Himala’ script by Ricky Lee at home.”

When Teri heard her name called, she was ecstatic. “It was a big reward for all that hard work,” she said.

Indeed, while most girls her age spent last summer loafing, Teri was making her debut film. And then she brought home an acting trophy for it!

Teri said the shoot in Cavite was like a “field trip” for her and fellow child actors Lenlen Frial and Solomon de Guzman.

She related, “Between takes, we would play games. We had a lot of fun. We became best buddies.”

In spite of Teri’s inexperience, her director said the young actress got the job done efficiently. “She attended a series of workshops and surprised me with the results. In her, I saw Anita’s character and sincerity.”

Sigrid admitted that the role could have been too heavy for a 13-year-old. “Every so often, I would remind her that we were only making a movie,” the filmmakers said.

Just in case, Sigrid’s mom, a psychologist, was around. But Sigrid never had to consult her. “I didn’t want to stress her out, either, because she was also the field cashier.”

Teri said Sigrid taught her how to talk with a deeper voice, and how to walk like a tomboy. “She said I shouldn’t exaggerate my movements, because Anita should still look like a normal kid.”

Eventually, Teri “became” Anita, “a confused kid who didn’t know why she fell in love with another girl.” 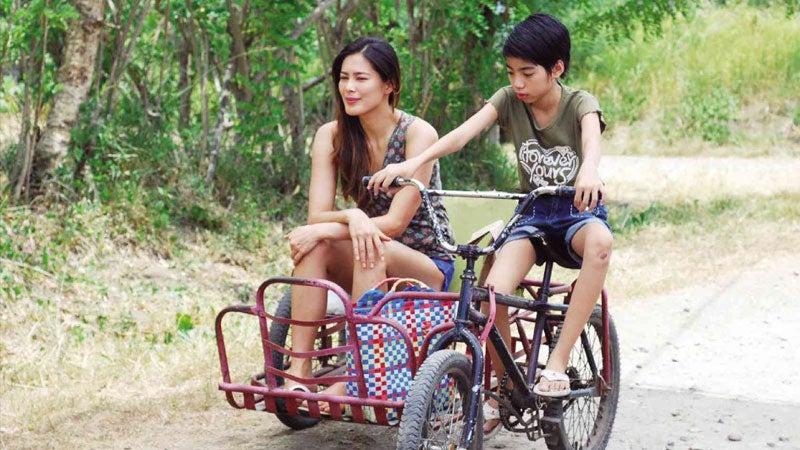 TERI, right, said costar Angel Aquino, left, treated her like a daughter on the set of “Chacha.”

The most challenging part could very well be the scene in which her onscreen crush Angel Aquino cuts her long tresses. Yes, that was Teri’s hair.

“I wasn’t scared,” the young actress said,  “because that was part of Anita’s transformation.”

Angel, who won best supporting actress for the same movie, went out of her way to make her teen costar feel at ease.

“She was like a mother to me,” Teri said. “She didn’t act like a celebrity at all. She was just a regular person.”

Wants to be a nun

Teri herself would like to maintain a semblance of normalcy even after her very early triumph.

Initially, she told only a handful of friends about the movie. But now her entire school (not to mention the whole country) knows about her best actress win. “My classmates congratulated me; some even asked for my autograph.”

Teri has no plans of acting full time, however.

She’s leaving show biz to her mom Cherry, who acts in TV shows, commercials and movies. (Cherry previously appeared in “Barako,” “Kubrador,” “Bakal Boys” and “I Do Bidoo Bidoo.” She had a small role in “Chacha,” a jealous wife who quarreled with Angel.)

Teri, whose favorite subject is English, hopes to take up Fine Arts or Medicine in the future.

“But after school, I hope to enter the convent and become a nun,” she quipped.

Why the contemplative life?

“I want to serve the church. I want to live peacefully,” Teri said.