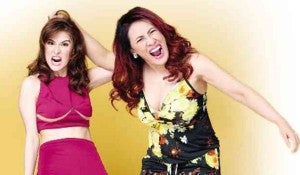 “The President has his hands full with the country’s problems. Why should I bother him with my love life?” said Ai-Ai de las Alas, who recently apologized to President Benigno Aquino after Malacañang had to address a rumor that the President was meddling with the comedienne’s court case.

“This is embarrassing. I don’t think P-Noy (Aquino’s nickname) even asks about his sister’s (TV host Kris Aquino) relationships. This issue is nakakatawang nakakaasar,” Ai-Ai said during a media gathering for her latest movie, “Kung Fu Divas.”

Ai-Ai married businessman Jed Salang on April 3. They separated a month later, with Ai-Ai accusing Jed of beating her up. In June, Ai-Ai filed a court case against Jed for violating Republic Act No. 9262, or the Anti-Violence Against Women and Children Act of 2004.

The accusation that P-Noy was helping Ai-Ai with her court case was allegedly made by Jed’s lawyer Joel Ferrer. “Next time he talks with the press, he should pray and think hard first,” Ai-Ai said of Ferrer. “Like me, he should be very careful. I think he is forgetting that his client was given a gag order.”

In June, Malacañang denied that members of the Presidential Security Group (PSG) had been assigned to the comedienne. During the press conference, Ai-Ai clarified that her two bodyguards were not members of the PSG, but personal employees. “Pinapasweldo ko sila. They protect me,” she said.

Ai-Ai admitted she was still recovering from heartbreak and wasn’t at all ready to fall in love again. “I was traumatized. I still cry at night, not for the person who broke my heart but because of this situation I am in.”

She added, “I’m only 40 percent healed. I have a long way to go. I’m giving myself two or three years to rest. I’m not ready for anything yet, although I go out on group dates. I enjoy eating out with friends.”

To keep herself busy when not working, the “Toda Max” mainstay said she frequented the gym, played badminton and watched movies. “I also like trying out different night spots. My friend Direk Wenn (Deramas, film and TV director) told me, ‘If you’re going through something, you have to make extra effort to feel better. You should go out and socialize.’”

She claimed to have learned a lot from the experience. “I’ve realized that God has a big plan for me and that His time is the perfect time. He will give me what I need when I really need it,” Ai-Ai told Inquirer. “What I went through strengthened my faith. There was a time when I questioned His intentions. Only recently did I acknowledge that I knew what I had to do all along, but was just too stubborn. I had to learn the hard way.”

She said her children, Sancho, Sophia and Niccolo, were now overprotective of her as a result of her failed marriage. “Sancho told me, ‘We will really give the guys who will show interest in you a hard time.’ With the three of them, I imagine, having a screening committee. I can’t date those who flunk the test.”

Ai-Ai added, “My wounds are deep, but I’m trying to move forward. While it’s easy to forgive, I admit I’m having a hard time forgetting.”

(E-mail the author at [email protected])