Things that go bump in the day: ‘Puti’ a tribute to ‘Itim’ 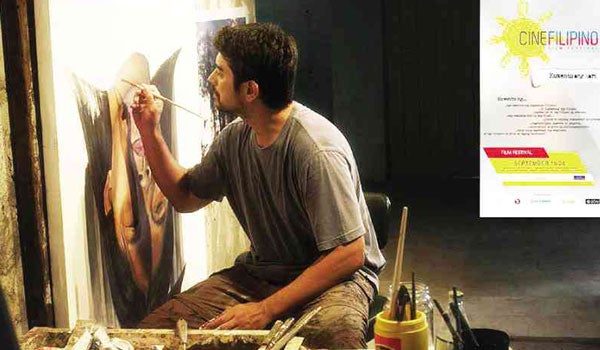 A PAINTER in real life, Ian Veneracion plays an art forger in “Puti.”

Advertising director Miguel Alcazaren realized that he had his work cut out for him upon embarking on his feature-film debut “Puti (Achromatopsia),” a CineFilipino Film Festival entry.

Alcazaren, who also had to wear the producer’s hat, was warned by well-meaning friends about “the schizophrenia of producing and directing” at the same time. Willfully, “I didn’t heed their advice.”

As a result, he jokingly pointed out: “My hair turned white … which is apt considering my film’s title.”

The 12-day shoot for “Puti” served as a crash course on Producing 101 for Alcazaren.

“I had to haggle for sponsorships in every department: equipment rental, post-production, even locations.”

Family and friends chipped in and provided venues for free. “I essentially tapped 20 years of goodwill in the advertising industry. I used up all my lifelines.”

“Puti,” regarded as a tribute to the 1970s horror classic Mike de Leon’s “Itim,” tells the story of an art forger who is compelled to save his child from a sinister force.

The idea hit him while attending his daughter’s summer music camp recital. “An opera singer performed Schubert’s ‘Erlking.’ It was a haunting piece… about a father struggling to protect his son from the Erlking, a malevolent spirit that preys on children.”

The “hypnotic” music inspired him to write “Puti.”

“The story brewed in my mind for several days and there were things going on in my life that just led me to conjure all these images in my head. I had been interested in doing a concept horror film that’s set in daytime.”

Unlike other thrillers that are set at night, the action in “Puti” mostly occurs before dusk. It isn’t the only defiant, nonformulaic aspect of the film.

“On a very shallow level, it’s a movie that will mess with your mind, disturb you or make you pee in your pants,” Alcazaren vowed. “On a deeper level, it examines the truth in the lives we live, that everything we do has a consequence.”

He sought to deliver his message in a visual manner—consistent with the film’s art-world setting.

The pace was “grueling” because many sequences were shot per day, and the dialogue was minimal. “It’s tougher to shoot a visual narrative where everything is reliant on the details and nuanced acting of your cast.”

Helping him realize his vision are newbies Jasmine Curtis-Smith and Lauren Young and industry vet Ian Veneracion. “I could not have asked for a better cast,” Alcazaren remarked.

Veneracion was perfectly cast, he explained, because the actor is a painter in real life. “He does paint and is familiar with the milieu.” He added, “Ian is terribly under-utilized in the industry. He has a very subtle range that was the right fit for the type of story I was trying to tell.”

He noted that it’s difficult to “gauge the depth of actors based on their television performances.”

Young and Curtis-Smith, who are products of today’s TV scene, proved to be “revelations” who “grew into their roles.”

“They did their homework… despite their hectic schedules.”

His crew rose to the challenge, too. “It was interesting because I mixed my regular team from commercials with people from the indie and TV scenes.”

Although the advertising world could be financially fulfilling, Alcazaren found the lure of cinema irresistible. “I have always loved film. It is my religion,” he quipped. “Doing commercials just doesn’t give me the right form of ‘worship.’ ‘Puti’ just so happened to be the most feasible to produce given the circumstances. I just needed to know if I could really do what I really think I was called to do: Tell stories on the big screen.” Bayani San Diego Jr.