Nora Aunor is ‘Mabuti’s’ reason for being 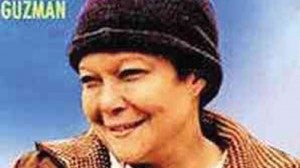 You don’t want to miss the CineFilipino entry, “Ang Kwento ni Mabuti,” if only for Nora Aunor, whose peerless, award-worthy portrayal and magnetic presence give director Mes de Guzman’s visually and thematically compelling drama a spare but forceful elegance—and its reason for being!

The Superstar is by no means the movie’s only attraction. In fact, with “Mabuti,” De Guzman (“Diablo,” “Ang Daan Patungong Kalimugtong”) delivers his most accessible film to date—an affecting and more easily “relatable” morality tale built around its lead actress’ thespic tour de force. (It will be screened today, Saturday, at Resorts World at 1:40 p.m. and Edsa Shangri-La at 7 p.m., and tomorrow at Lucky Chinatown at 1:50 p.m. and Gateway at 9:30 p.m.)

Life is hard, but that doesn’t stop the cash-strapped but cheerful grandmother from basking in the simple pleasures of barrio life—until a letter demanding payment for an overdue loan compels her to take the five-hour trip to the big city to ask for financial reprieve.

Mabuti’s life takes a fateful turn, however, when she meets friendly stranger, Nelia (Sue Prado), who ends up giving her more than just sweet delicacies to feast on (no spoilers here)—a heady mix of moral contradictions that Aunor juggles with subtlety and skillful relish—and a Solomonic dilemma that De Guzman presents in a deceptively simple but stirringly effective manner.

The gorgeously photographed production gets off to a slow start, and its “supernatural” flourishes are sometimes a little heavy-handed. But, De Guzman’s unsentimental handling of its allegorical and potentially melodramatic elements lends the film a gritty emotional heft that its intuitive lead actress mines incisively and judiciously—no emotion is manipulated and not a single tear shed is unearned!

It’s refreshing to see the actress juggling her character’s pathos with the unforced humor she generates in the production’s light moments. What’s even more astounding is the fact that Aunor doesn’t require long and flashy lines to relay Mabuti’s carefully calibrated tale well—she can tell it just by using her expressive face and those fabled orbs to shuttle between contrasting emotions.

The role is a tough  row to hoe, even for an experienced thespian like Nora, who isn’t tasked to intone crowd-pleasing dialogue or “sell” overly dramatic sequences. Just the same, she delivers her Ilokano lines believably, as if she grew up speaking them. And, unlike some self-indulgent actors, she knows how to make it look effortless and heartfelt.

Ironically, it’s the movie’s other adult actors who occasionally appear rigid and mechanical when they’re faced with the formidable challenge of sharing the spotlight with her. It’s a risk you have to face when you’re acting with a gifted actress like Aunor—if you let your guard down, she’ll chew up the scenery and “eat” you alive!