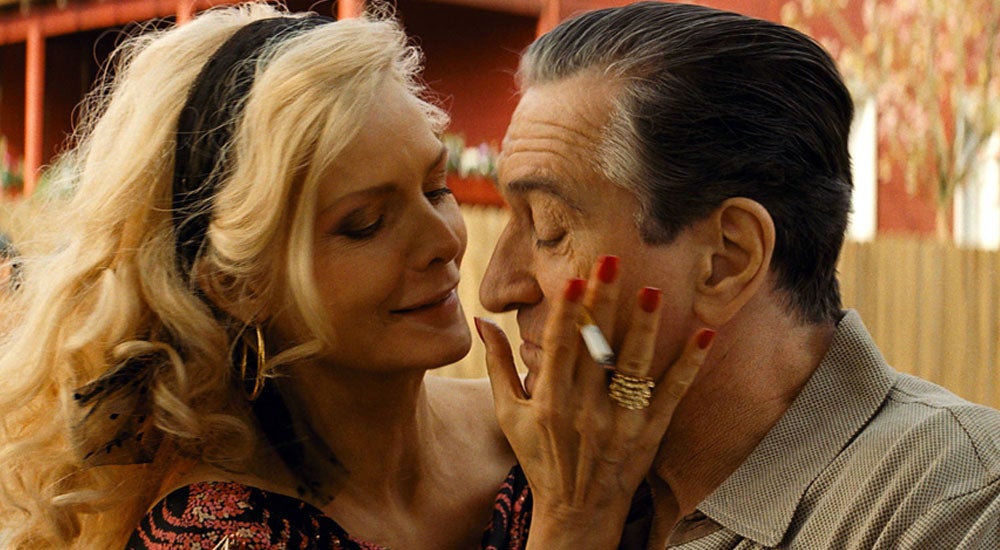 Talk about a promising duo for a dark mob comedy: Robert De Niro, whose mob-film pedigree needs no explanation, and Michelle Pfeiffer, who was, after all, “Married to the Mob.”

Happily, these two more than carry their weight as husband and wife in director/co-writer Luc Besson’s new film “The Family.”

De Niro is Giovanni Manzoni, an ex-mob boss from Brooklyn who’s snitched on his former cohorts and must disappear fast, along with his wife and two kids. Newly named the Blakes, they set up in a picturesque Normandy village (is there any other kind?)

There, Fred, Maggie and kids Belle and Warren try to assimilate. They’re not too great at it, since they have varying anger management issues.

On the other hand, they’re helped by the fact that, magically, the villagers all seem to speak fluent English, from the cafe waitress to the parish priest to the village grocer. In fact, all the kids at school speak English. And all the teachers, and the principal — and every single member of the town’s film society.

Now, no one expects the film to be in subtitles. But Mr. Besson, you’re French! And so you know that even if all these people DID have a fluent command of English, they wouldn’t be cheerfully using it all day long.

But we digress. Because the film has deeper issues. Namely, the violence, in the name of “dark comedy.” Giovanni — er, Fred — cannot refrain from beating people to a pulp, or to death even, if he feels he’s been disrespected or dealt a raw deal. At one point, a plumber gives him an estimate he doesn’t like. Not a good idea.

Maggie (a funny and touching Pfeiffer) tries to rein in her husband. But hey, even she’s not above a little arson — actually, blowing stuff up — when she feels slighted. As for the beautiful, blonde Belle (Dianna Agron of “Glee”), she has a propensity to beat up schoolmates — say, if you swipe her pencil box. Brother Warren (an appealing John D’Leo) has the most self-control, but he’s inherited other qualities from Dad.

Watching over the family are a couple FBI handlers and their boss, played by Tommy Lee Jones, who could do this kind of cranky-agent stuff in his sleep, but is nonetheless a welcome presence.

It takes an awfully long time to establish the story, and the pacing feels off. Finally, things get going when the jailed mob boss back home finds out, via an absurd (yet amusing) chain of coincidences, where the family is.

The movie, based on the novel “Malavita” by Tonino Benacquista, picks up here, but alas, so does the cartoonish violence. Not to be prudish, but it’s a bit hard to keep laughing when so many innocent (and nice!) people wind up dead. And then the Blake kids get involved. When I saw the film, the audience broke into rousing cheers when the young boy picked up two humongous guns and started shooting. It was a little sickening.

There is one very funny scene, where Fred appears on a film society panel. We can’t spoil the secret, but let’s just say that, while it has nothing to do with the story, it will delight De Niro fans as well as those of Martin Scorsese, who is, as it happens, a producer on the film.

But it might remind you that, with Scorsese and De Niro involved, this film should be making mobster magic. Au contraire, it doesn’t.

“The Family,” a Relativity Media release, is rated R by the Motion Picture Association of America for “violence, language and brief sexuality.” Running time: 110 minutes. Two and a half stars out of four.