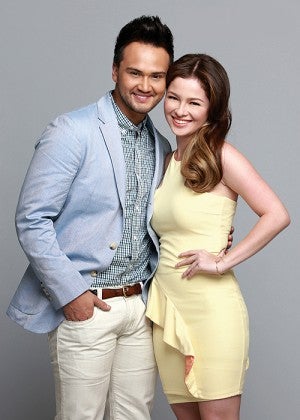 ONE OF the women being linked to Billy Crawford is Andi Eigenmann.

After the recent breakup of Billy Crawford and fellow Kapamilya talent Nikki Gil, a lot of rumors started spreading about the actor-TV host who had opted to keep his silence.

“One rumor says I’m gay, another says I’m a drug addict,” says Billy in a recent presscon for the movie “Momzillas.” “I’ve also been linked to three girls already, and the last one is rumored to be pregnant.”

He understands that the rumors were a result of his refusal to reveal the real cause of the split up. “This is because people have already made up their minds [that I’m a bad person]… I don’t mean harm to anyone. If I talk, hahaba pa ’yan,” he explains.

He feels embarrassed that he is being romantically linked to his “Momzillas” costar Andi Eigenmann, who is one of the girls being blamed for the breakup.

Billy has already apologized to Andi whose name, he says, is merely being dragged into the issue because of their movie. “Andi became a friend of mine through the film. We became close—that’s true—but the breakup wasn’t Andi’s fault. It’s not fair to include her in the story.”

Billy adds, “I first met Andi when she was doing the show ‘Agua Bendita.’ We got to know each other better while working on this movie. Direk Wenn (Deremas) would always tell us, ‘Mag-usap nga kayo!’ We had to do it to develop chemistry. She’s a really nice person.”

Andi has come to Billy’s defense, saying: “That’s really how it is. Billy has denied that rumor many times already. I hope people will stop inventing stories as to what really happened between them. It’s really personal.”

In “Momzillas,” Billy and Andi play a couple engaged to be married. They hatch a plan to reconcile their feuding moms (Maricel Soriano and Eugene Domingo), who figure in an accident and end up lost in a remote island. The two mothers are forced to work together and settle their issues if they want to survive.

Billy says working with the “Momzillas” cast is a blessing. “Everyone was so relaxed on the set. Even though all of us were going through something in our lives, none of us talked about personal stuff,” he says.

Billy adds, “I’ve decided not to elaborate on the split up. Mama (Maricel Soriano) didn’t ask about it either. That’s why I respect her even more. I say the same for the rest of the cast. They really treated me as part of their family during the months that we’ve worked with each other. Even when we’re no longer working, we still communicate. I know that whatever happens, they’re here for me.”