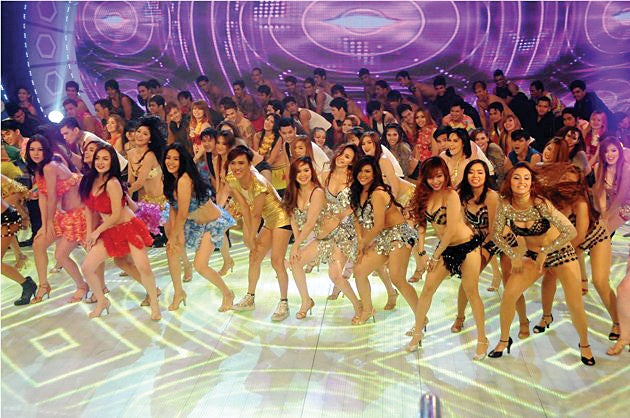 Now that complainants are finally having some success in their campaign against kiddie TV shows that aren’t child-friendly, it’s high time for us to up the ante another notch, and collectively move to remove “sexy” material or performances from noontime shows!

These are ostensibly “family” programs, but for decades now, they have featured skimpily-clad sexy dancers whose gyrations leave nothing to the imagination—unless you’re blind.

To make things worse, some of their macho hosts love cracking green or brown jokes, which their adult viewers lap up.

Trouble is, everybody has conveniently forgotten that there are many young, impressionable and vulnerable viewers watching, so when you throw so much “sexy” material at them, you’re doing possibly irreparable harm to their young psyches by subjecting them to viewing fare that’s much too grown-up for them to handle with sufficient understanding and self-control.

The fact that this (mal)practice has been allowed to fester means that many parents and other so-called protectors of the young find nothing wrong with it. How cluelessly dead-wrong we are!

Sexy, gyrating dancers at noontime? That deludes kids into thinking that this is desirable, “fun” behavior, so it’s okay  or even preferred for them to also act out sexy moves and impulses way before they can responsibly express themselves in this graphic and in-your-face or in-your-libido fashion!

Excuse us, but we’ve watched daytime TV in many other countries, and none of them feature skimpily-dressed dancers sexing it up for a so-called “family” audience. Why do we do it? Because we’re clueless and don’t understand how this can adversely affect kids? Because we really don’t care? Because we don’t bother to think, and regard TV merely as harmless wallpaper? Then we’re really in trouble!

How did this nefarious state of affairs get started? People with a sense of pop history recall that it began with a noontime show’s “sexy” dance contest, which turned out to be popular—and made producers take the next step and make sexy dancing a regular feature on the most appropriately named local boob tube!

So, why didn’t our “moral guardians” protest at the time? Possibly because they didn’t realize how much worse things could get!

In any case, this is our sordid situation now, so we trust that child psychologists will join us in warning the viewing public, which is supposed to know better, about “sexy noontime” viewing fare’s negative impact on vulnerable young viewers.

Can sexy dancing be excised out of noontime TV? A positive indication is the fact that the Movie and Television Review and Classification Board (MTRCB) has had some success in making “macho” TV hosts curb their loose-lipped propensity for making off-color jokes on-cam. Their “jokes” used to be positively crude and lewd, but strong sanctions have made them clean up their act.

The same thing can happen to the problem of sexy dancers on local noontime shows. Only, this time, it isn’t the individual host but the entire noontime-show syndrome that needs to be reformed, redeemed, and get some sense knocked into its collective head.

Is this just futile and feckless wishful thinking? With strong viewer support and the MTRCB’s enlightened handling, it needn’t be.