Miss Supranational had feeling she’d go home with the crown 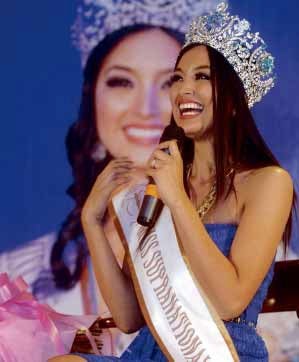 MANILA, Philippines—It was her first overseas trip and Bb. Pilipinas-Supranational Mutya Johanna Datul almost missed her connecting flight to Moscow en route to Belarus where the international pageant was held.

But make it she did. The 21-year-old Isabela native bested 82 other international delegates and became the first Asian to bag the Miss Supranational international title at coronation ceremonies held in the Belarusian capital Minsk on Sept. 6. The crown comes with a $25,000 cash prize.

Returning home, Datul told media men at a press conference on Monday she had to ask strangers for instructions on how to find the gate for her connecting flight. It was her first overseas flight and she flew alone, she explained to welcomers gathered at the Gloria Maris Banquet Hall at the Gateway Mall in Quezon City.

“People from Binibining Pilipinas advised me not be afraid to ask questions. So that’s what I did, I asked a lot of questions to a lot of people,” the five-foot-eight Datul shared in a mix of Filipino and English.

But she candidly confessed that on her way home, she missed her connecting flight in Hong Kong back to the Philippines on Monday afternoon—the reason why her press conference was moved several hours later.

Other beauty queens at the welcome event said they were not surprised Datul was victorious. “She’s very genuine on stage, you can see it. Her innate charm just radiates, and you can tell she’s being true to herself,” said 2013 Binibining Pilipinas first runnerup Pia Wurtzbach.

Fight for the title

“We all knew from the very beginning that you would make us proud. And we are proud of the woman you have become. You are the nicest person I know, very humble. I hope you will not change,” said 2013 Miss Universe Philippines Ariella Arida, who is set to represent the country in the Miss Universe pageant in Moscow, Russia on Nov. 9.

Bea Rose Santiago, 2013 Bb. Pilipinas-International, said she and the other 2013 titleholders monitored updates from the pageant’s website and social media accounts to follow their “baby sister’s” fight for the title.

“You really stood out from the rest of the other candidates. You’re very genuine, and very charming,” added the international fashion model who is set to compete in the 2013 Miss International pageant in Tokyo in December.

For 2013 Binibining Pilipinas-Tourism Cindy Miranda, Datul’s victory serves as an “inspiration and motivator” for her and the other Filipino queens to excel in their respective international competitions.

Miranda is next in line. She is set to leave for the 2013 Miss Tourism Queen International pageant in China later this month.

Datul shared that as soon as she landed in Minsk, she had a premonition she would win.

“As soon as I set foot in Minsk, I felt as if there was a heavy crown on my head. I didn’t know why I felt that way, but that early, I imagined myself going back to the Philippines with the crown on my head,” Datul said.

Datul also related that during the closed-door panel interview with four other delegates, she was straight to the point, unlike her competitors who “talked too much.”

“I first introduced myself in Russian, and then I said ‘I will go straight (to the point). I want to become Miss Supranational because this is my ultimate dream. I want to become an ambassador, a good example and an inspiration to many,’” she recounted.

Datul was also proclaimed Miss Personality in ceremonies leading to the coronation night. She was also in the Top 10 of the talent competition.