Kris Lawrence’s new album ‘some sort of a diary’ 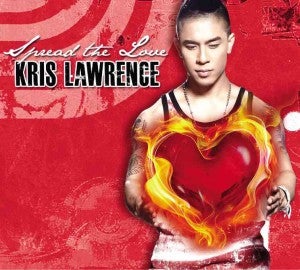 THE SLEEVE of his new album. He says many of the songs here are about Katrina.

“We will be honest with her when the time comes. We’re sure she’ll find out, anyway what her parents went through,” singer Kris Lawrence said of his 11-month-old daughter Katy (short for Katrence), with actress Katrina Halili.

The singer claimed that he and Katrina had grown more in love with each other, now that they had baby Katrence, who will celebrate her first birthday on Sept. 18. “I couldn’t ask for more,” he said. They have plans to tie the knot “maybe when Katy can already walk. We want her to be the flower girl.” They’re not living together, though. “My house is just a stone’s throw away from hers. We want to get married before we live together. We’re happy where we’re at. We go for whatever works, whatever makes us happy.”

During a press conference for his album “Spread the Love,” from GMA Records, Kris  talked to us about his songs and adjusting to being a first-time daddy.

How long did it take you to produce these 12 tracks?

I started work on it in 2007. It’s a compilation of songs that I’ve written. After my first album (“Kris Lawrence”), I thought I could have an all-original record, but the trend at that time was revivals. My second album, “Moments of Love,” was all covers. For this one, I composed eight of the 12 songs.

Are there songs here for Katrina?

A lot. The album is some sort of a diary. I wrote “Di ko Matatangap” in 2010, when Kat broke up with me and I couldn’t accept it. When we started talking again five months later, I wrote “Sabihin Mo Naman.” My personal favorite is “Try Again,” first because I wrote it the fastest, in only 20 minutes. I was super inspired; my pen just wouldn’t stop. I went to the piano and kept playing. Second, because as I wrote it, a lot of things came to mind, like mistakes I made when I was young.

Will Katrina be more picky with her roles, now that she’s a mom?

I think so. I appreciate that she asks for my opinion… she should keep playing roles that will make her shine.

How does she support your music?

She watches “Sunday All Stars,” (the GMA 7 Sunday variety show, where Kris is a regular), and sends me text messages about my team’s performance. She listens to my new songs more attentively now. She used to get distracted easily.

Everyday, we see something new in her that reminds us of ourselves. When she throws a fit… she got that from Kat. Sometimes she covers her face with a towel and pretends to cry. I guess she got that from her mom, too. Both Kat and I are shy, so Katy is naturally shy. I think she’s also starting to sing. She can hold a scream for a long time.

Do you have problems adjusting to being a new daddy?

Not really, I guess it’s because things are happening so naturally. I’ve changed so much. When I’m out with friends, I keep thinking of Katy.

What do you fight about as parents?

We seldom fight. Arguments usually last all of 10 minutes. I’m always the first to say sorry. The secret to a happy life is a happy wife, as they say.

Do you talk about who gets to be the disciplinarian?

Kat is the spoiler so I feel that I should be the strict parent.