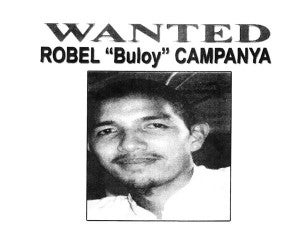 MURDER suspect Robel Campanya, shown here in a poster prepared by the victim’s family, remains at large after a Quezon City judge ordered his arrest on June 26

MANILA, Philippines—Filipino rap superstar Gloc-9 and the watchdog group Volunteers Against Crime and Corruption (VACC) have joined the “Justice for John-John” campaign in behalf of the family of John Ricci Berroya, a 20-year-old Quezon City resident murdered on January 13.

The campaign calls for the immediate arrest of suspect Robel “Buloy” Campanya, a Quezon City Hall parking attendant. It was launched last month by the victim’s grandparents, Angelito Berroya and wife Felicidad, of Barangay Bahay Toro.

John Ricci, a high-school dropout, lived with his grandparents for several years. His mother, Rosalie, died of cancer in 2008.

Police records showed that John Ricci was in the company of a cousin and some friends in Palanas A, Barangay Vasra, when Campanya suddenly approached and stabbed him with a kitchen knife for a still unknown reason.

Then employed as a city hall parking attendant and a known neighborhood toughie, Campanya remained at large. After the killing, reports reached the victim’s family that he had been sighted at an Internet café in the Pag-Asa area and also at SM City North mall. The suspect had also been reportedly traveling between Quezon City and Pagbilao, Quezon province, where his wife’s family lives.

Gloc-9, or Aristotle Pollisco offstage, was John-John’s music idol, according to the victim’s relatives. “He knew the lyrics of most, if not all of his songs by heart,” said cousin Aaron Bagtas. “Like Gloc-9, he also came from humble beginnings. That’s probably one of the reasons why he could relate to his idol.” 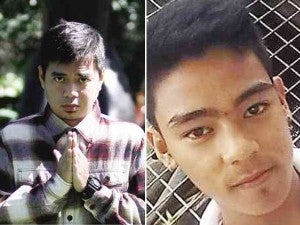 Saying he “felt sad when he learned about John-John’s death,” Pollisco joined the Berroyas in expressing hope that there would be no letup in the police operations to catch Campanya.

“Honestly, every time I encounter a fan, there’s always an immediate connection. I’m very grateful to them for believing in me and my music. I should know. I was a big fan myself of (the late) Francis M,” Pollisco told the Inquirer.

Some of Berroya’s friends have also chipped in to print out Campanya “wanted” posters for distribution around Metro Manila.

VACC head Martin Diño said “putting the suspect’s ‘wanted’ posters on You Tube and Facebook would be a big help. If necessary, we would help in placing the witnesses in John-John’s murder under the government’s witness protection program.”

On June 26, Judge Germano Francisco Legaspi of the Quezon City Regional Trial Court Branch 77 issued an arrest warrant against Campanya, who had been charged with murder, with no bail recommended.

Read Next
PH ‘more fun’ for Katy Perry in music video
EDITORS' PICK
Duterte meets with Cayetano, Velasco amid speakership issue
House to probe Facebook takedown of gov’t accounts
Smart poised to turn PH into ‘Smart 5G country’ with nationwide rollout
Water remains our saving grace right now
Feud is over: Velasco next Speaker on Oct. 14
Get 80% OFF Ignite 2020 Cyber Tickets starting 28 September
MOST READ
Velasco to take over as Speaker on Oct. 14
‘I offered to resign’ because of endless corruption, says Duterte
Gun attack in PMA: Air Force man killed, 2 others wounded
Duterte meets with Cayetano, Velasco amid speakership issue
Don't miss out on the latest news and information.