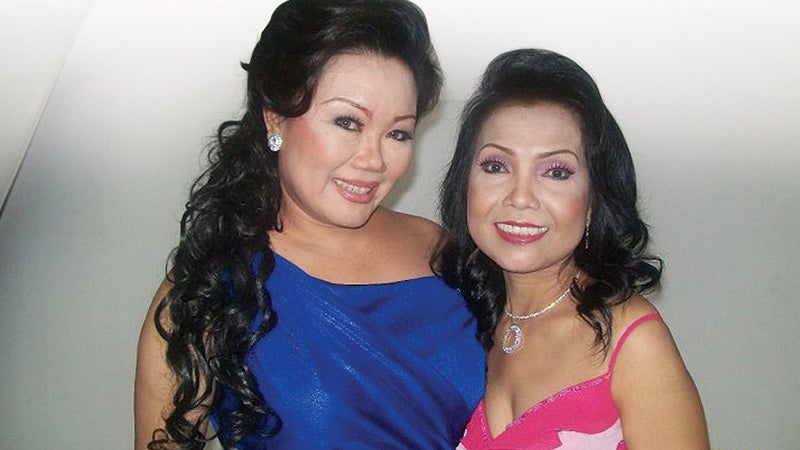 Dulce (left) is shown with Susan Fuentes. Dulce announced that the Queen of Visayan Songs died from colon cancer on Saturday.

MANILA, Philippines—Queen of Visayan songs Susan Fuentes has passed away after a battle with colon cancer, singer Dulce said Saturday.

“I was praying for her on the phone and assured her of the Kingdom where Jesus is waiting to welcome her home, where there’s no more sadness or pain,” said Dulce.

“To everyone who helped Susan Fuentes, we thank you so much from the bottom of our hearts,” said Dulce.

No member of her family was by her side when she passed away, the fellow Visayan balladeer added.  She had long been estranged from her two children.

Fuentes had been living in Quezon City since 1973.

Born Susan Toyogan in Butuan City, Agusan del Norte, Fuentes was the fourth of five siblings. Her father was from Bohol, her mother from Surigao.

As a singer, Fuentes’ sultry performance was noted for its “lusty vocals and emotional styling.”

It was she who, in the 1970s and ’80s, originally recorded and popularized such Visayan classics as “Matud Nila” (They Say), “Gimingaw Ako” (I Feel Lonesome), “Usahay” (Sometimes), “Rosas Pandan.” She is the original singer of that beloved season staple “Miss Kita Kung Christmas.”

The repertoire—ranging from Cebuano to Boholano to Ilonggo traditional airs and folk ditties—made her very popular in the Visayas and Mindanao and a novelty hit in Luzon. So popular were they that a few became theme songs for lovers who didn’t even speak the language.

The poignancy was in the music, but more so if those lovers understood the lyrics, and then they would be unspeakable.

The range of Fuentes’ voice was such that she could effortlessly shift from the agony of “Gimingaw Ako” to the friskiness of “Rosas Pandan.” Here is another authentic voice that’s unheard by a new generation of listeners—and neglected by audiences as soon as they’re weaned on engineered voices of warblers who believe too much in their press releases.

By age five, she was already joining amateur singing contests. While still in high school, she was featured in Bisaya magazine (Cebuano-language counterpart of Liwayway) for her talent and beauty.

After high school, she went to Manila, where family friend Eugenia Molina, sister of singer Merci, helped her sign up with Alpha Records.

When she transferred to Jem Recording, she was billed as the Queen of Visayan Songs. Here, she released seven albums, all certified gold records in the Visayas and Mindanao. With Constantino C. Tejero and Bayani San Diego, Philippine Daily Inquirer

Read Next
Movie Preview: About Time – a film about love and life
EDITORS' PICK
Experience clearer calls nationwide with Smart VoLTE
Tracing app pesters MRT commuters
New Year, New Rediscoveries
Senate probe foils vaccine overpricing
Editorial: Unusual haste
Driving can be even more rewarding this New Year — here’s why
MOST READ
Duterte to firms: No franchise until you settle your accounts with gov’t
7 copassengers of UK variant patient can’t be traced
3 things Leni can learn from Biden’s victory
#DefendUP trends after DND scraps agreement with UP
Don't miss out on the latest news and information.