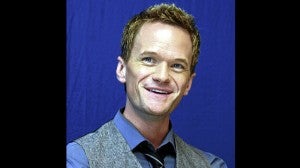 HARRIS. Blessed with an abundance of unique opportunities. RUBEN NEPALES

The actor casually dropped those bits of information in a recent conversation with him. He invited us to watch him at the Magic Castle, a popular Hollywood club dedicated to sleight of hand, and where the Academy is headquartered.

Looking dapper in Dolce & Gabbana, Neil was replying to our question about successfully hosting the Tony Awards for the second time last June when he revealed his hobby. “The Tonys were great,” he answered. “It’s always fun to do it. I always loved watching the Tonys when I was younger. I put it on a pedestal, because I love theater. I’m now the president of the Magic Castle. I love encouraging people to go see things live. I have a passion for it.”

Asked to talk some more about his passion for the art of illusion, the star of the hit movie, “The Smurfs,” and the TV series, “How I Met Your Mother,” said, “My hobby is magic. I loved going to the magic store when I was a kid. Magic is the best hobby in the world, because you can buy little tricks, learn them, then present them. You can study the history of magic, learn close-up card or illusion, mentalism, and so on.”

“It’s a great private club,” he said of the Magic Castle, a residential mansion built in 1909 that is now a members-only venue offering shows, dinners and brunches. In these laid-back times, the Castle is known for its strict dress code: Coat and tie for men, and evening wear for women. “And, we’re making some changes. The food is better than ever. I never had any idea that I would have to make fiduciary decisions in a $9-million company – but, here we are!”

When he’s not casting a spell at the Castle, awards shows, or on TV and film sets, Neil dotes on his twins (born via surrogate mother) with his partner, David Burtka, who’s also an actor. Born in October last year, Gideon Scott and Harper Grace brought a gleam to their father’s eyes as he talked about them.

“Our kids are so young right now that I can’t really talk much about what it’s like raising them,” Neil commented. “We’re in the early phases of it. They’re just developing personalities and figuring out that they can crawl with two hands.” Laughing, he added, “They still haven’t quite gotten there yet.”

Neil shared an interesting anecdote about “The Smurfs,” where he and “Glee’s” Jayma Mays play a married couple expecting a baby. While filming a scene where he looks at an ultrasound photo, Neil shared, “I kept getting comments from Jordan (Kerner), our producer, and Raja (Gosnell), our director, about what it’s like to be in the position of having kids – because they assumed that I would never have them. But, I was already six months into having kids then. We were keeping it well under wraps from anyone. So, when it came to doing that scene, Raja came up and was trying to explain to me what it was like when he first saw a sonogram.

“So, I went to Raja and whispered in his ear, ‘Just so you know, please don’t tell anyone that we’re expecting twins in October.’ He blanched, then gave me a big hug; he couldn’t believe it! Raja was one of the few people I told, because I felt that he needn’t have to work so hard to convince me what it was like to have kids.”

Going back to the Tonys, he spoke about his well-received number with Hugh Jackman. “The opening number was a lot of fun,” he recalled. “We made sure that people didn’t know what it was. So, we had to resort to a lot of secrecy. Hugh and I rehearsed in a dance space. We snuck in wearing baseball caps so no one would know. Even when we rehearsed in the auditorium, they cleared the place. So, it was really a surprise.”

In 1997, he was quoted as saying, “The two biggest attributes I hold dear are creativity and authenticity.” More than a decade later, how does he, at age 38, think about those qualities? “Everyone has a couple of core words he connects with and define him as a person,” Neil replied. “I chose creativity and authenticity. I love creativity on any level. From the time that you’re a little kid, you should spend some time painting and going on treasure hunts, rather than sitting in front of a monitor, playing video games.

“Authenticity is tricky, especially in Los Angeles. You have to have a pretty decent bulls–t meter, because you get a lot of agenda coming at you from different directions. It’s nice and refreshing to find a sense of authenticity, in yourself and in whomever you’re with, so that you can trust and feel safe.”

Neil, who will always be Doogie Howser to the many fans of that TV series, confessed that he has only one lament in his life thus far. “I regret not being able to go to college and not having a formal education,” he admitted. “I went straight from being a child actor to an adult performer and kept working. I kept moving into different chapters. So, I missed [and regret] an element of anonymity, being able to figure out who I was as a person.”

“At the same time, I’ve been blessed with an abundance of experiences that are so unique,” Neil said, looking at the bright side. “I got to meet amazing people and work on amazing projects, from opening the Oscars to doing Shakespeare productions in an outdoor amphitheater. I’ve been blessed, work-wise. So, I can’t regret the former, because I got to experience the latter!”

Read Next
Selling the sizzle, not the steak
EDITORS' PICK
Smart brings KCON:TACT especially 4U to subscribers from June 19 to 27
Lacson disputes need for more COVID-19 vaccine funds
Gilas out to prove Korea win not a fluke; Tab fires back at ‘lucky shot’ remark
Smart celebrates all kinds of ‘#SimplyLove’ for Pride Month
How this dad raised an empowered trans daughter
Minor’s death in Laguna drug raid prompts probe; 10 cops held
MOST READ
Banker’s grandson lands dream job at BPI
The opposition’s dilemma
Underdog Dasmariñas vows to fight to the death vs Inoue
Rajko Toroman praises, warns Gilas Pilipinas
Don't miss out on the latest news and information.