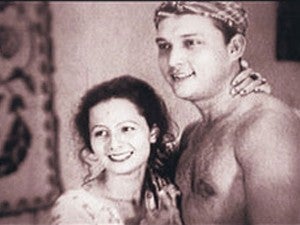 It was a “whodunit” involving a movie, probably now worthy of a movie itself.

This movie, “Brides of Sulu,” opens the three-day 5th International Silent Film Festival to be held at the Shang Cineplex of Shangri-La Plaza Mall starting Friday at 6 p.m.

For years, members of the Society of Filipino Archivists for Film (Sofia) have been investigating whether an American B-movie titled “Brides of Sulu,” released in 1934, was actually two Filipino silent films “reedited and assembled together.”

Sofia member Teddy Co likened it to solving a jigsaw puzzle where “almost all of the pieces are already there.”

After painstaking research that bordered on detective work, Co and colleague Dr. Marti Magsanoc believe they have established a connection between “Brides” and Filipino prewar films “Moro Pirates” and “Princess Tarhata,” both produced in 1931.

In their search for clues, the duo became increasingly suspicious that the Filipino films were “pirated” by American distributors to meet the US demand at the time for movies that showcased the exotic Orient.

“It even featured a narration that can be deemed condescending, describing the Filipinos as savages,” Co said in an exclusive interview with the Inquirer. “It was reedited to fit the Americans’ colonial designs.”

Sofia’s goal is to reclaim these “lost” silent films and retrace its Filipino roots. “All films produced in the Philippines during the silent era, from 1912 to 1932, were believed to have been lost or destroyed,” Co explained.

If Sofia’s theory is proven correct, “Tarhata” and “Pirates” can very well be “important finds in film archiving,” Co said. “These silent films were produced earlier than the oldest surviving prewar (talkie) movie ‘Zamboanga’ which was shown in 1937,” he added.

“Brides” was a “missing gem” that was right under the archivists’ noses, Co noted. This supposed B-movie (a low-budget, commercial type) had been on sale in the US video market, with excerpts posted on YouTube, he said.

“I got my copy from (the online store) Amazon,” Magsanoc said.

But for Sofia members, the quest to recover “Brides” had gone beyond the Internet. They followed various trails that led them to school libraries, museums and obscure video shops.

They also pored over newspaper clippings, movie magazine articles, even scholarly dissertations—all in pursuit of “Pirates” and “Tarhata.”

Co first took interest in “Brides” in 1996 when he read about it in Film Fax, a magazine on American B-movies. “It was like a directory of old films and I saw an advertisement for ‘Brides of Sulu,’” he recalled.

According to the ad, the film’s cast included a name familiar to Filipino cinemaphiles: Eduardo de Castro, an actor-director from the silent era.

“(De Castro) was touted as the Filipino version of Rudolph Valentino and was the first matinee idol in local cinema,” Co said. “An American mestizo, he worked and had a son with top actress Mona Lisa, who later starred in the Lino Brocka film ‘Insiang’ in 1976.”

Based on the credits, “Brides of Sulu” top-billed De Castro and Adelina Moreno, also an American mestiza. Born in Iriga, Camarines Sur, Moreno was later renamed Gilda Gales and was billed as the “Greta Garbo of the Philippines,” Co added.

Interestingly, the oldest surviving Filipino talkie “Zamboanga” was directed by De Castro. “‘Brides’ was like the first draft of ‘Zamboanga,’” Co said, noting that the two movies almost had the same story line.

US point of view

His curiosity piqued by the magazine item, Co later checked a 1977 thesis by Carmencita Momblanco of the University of the Philippines, which enumerated all the Filipino films produced from 1908 to 1958.

From the Momblanco thesis, Co confirmed that there were indeed two films about Mindanao made in 1931, “Pirates” and “Tarhata.”

“‘Pirates’ was directed by Jose Nepomuceno, the father of Philippine cinema,” Co said. “The director of ‘Tarhata’ is unknown, but it was produced by a cinematographer named Jose Domingo Badilla.”

In 2009, Co started working with Magsanoc who was also pursuing the same leads. “We compared our findings, and it strengthened our belief that ‘Brides’ was Filipino,” Co said. “The film’s point of view wasn’t American. It was Filipino.”

For starters, Co said, even if the film’s authorship remained uncertain, the film was still shot in the Philippines—in Zamboanga and Sulu—and featured Filipino actors.

Co also pointed out that if the sound was turned off, the movie would indeed have the look of a silent film: “The actors’ performances were gestural and over-the-top, as was the practice during the silent era.”

Who is John Nelson?

To get to the bottom of the mystery, the Sofia team did cross-referencing and multisourcing, Co said. Other sources and documents pushed the archivists in the same direction.

In his own research, Magsanoc learned that “Brides” was included in the American Film Institute (AFI) catalogue, which “listed all the movies released in the US through the years.”

Based on the AFI list, the director of “Brides” was one John Nelson.

“We looked at different sources and couldn’t find an American director by that name. It led us to conclude that John Nelson could be Jose Nepomuceno since they shared the same initials,” Co said.

The AFI entry on “Brides” also didn’t mention a producer but only a supervisor in the credits. And so Co asked: “Was it because it was not ‘produced?’ Was it because the supervisor only oversaw the reediting of two films?”

“Brides” also didn’t list a sound technician. “Was it because it was originally a silent movie?”

Co, Magsanoc and their research assistant Janine Quintana found more documents that appeared to support their theory. These included the 1940s magazine Philippine Movie News which featured an interview with Eduardo de Castro.

In the magazine article, De Castro mentioned two films that he said he made in 1931: “The Brides of Sulu” and “Moro Pirates.”

Magsanoc also interviewed Luis Nepomuceno, the filmmaker-son of Jose Nepomuceno. “When I showed him a clip of ‘Moro Pirates,’ (Luis) said that it could be the work of his father,” Magsanoc said.

The interview was arranged with the help of Nady Tofhigian of De La Salle University, who did a thesis on Jose Nepomuceno.

Like most films from the silent era, all of Nepomuceno’s works, including “Dalagang Bukid” (which starred National Artist Atang de la Rama in 1919), have been lost,” Co said.

The discovery of “Moro Pirates” as a lost Nepomuceno can potentially change history books, he said.

Magsanoc also found newspapers ads in the old Manila Tribune and Philippines Herald for “Pirates” and “Tarhata” at the Lopez Museum.

“I studied the ads closely and noticed that the ‘Tarhata’ ads mentioned Delly Moreno as its star. Is Delly the nickname of Adelina Moreno who is also the lead actress in ‘Brides of Sulu?’” Co said.

Co also said both the synopses of “Tarhata” and “Pirates” matched that of “Brides,” based on the newspaper clippings.

“The puzzle is 95-percent solved,” Co said. “We hope to find another source who could verify our findings.”

“A British archivist, Luke McKiernan, agreed with our findings. We expect that this will provoke debates and discussions, but we hope ‘Brides’ will spark more research work and lead to the discovery of more mislabeled and pirated films,” Co said.

“There could be more Filipino silent films stored in archives abroad, like in Spain and Mexico,” he added.

To popularize its campaign to reclaim lost Philippine movies, Sofia has set up a public screening of “Brides of Sulu.”

The movies will be set to live music by Filipino musicians covering diverse genres from jazz to rock. “Brides of Sulu,” for example, will be accompanied by Armor Rapista and the Panday Pandikal Cultural Troupe from Jolo, Sulu.

“We hope that through music, we’ll be able to bring these ‘lost’ silent films back home,” Rapista said.

Co said his group’s investigation was made possible with the support of the National Commission for Culture and the Arts (NCAA), the Goethe Institut (which spearheads the Silent Film Festival) and the Film Development Council of the Philippines.

Filmmaker Elwood Perez, a member of NCCA’s cinema committee, underlined the importance of retrieving and reclaiming lost silent films. “These films are part of our national patrimony. If we neglect the past, we lose our soul as a nation.”